The way they unearthed Lenin's buried head couldn't have been more different: Filmmaker Rick Minnich dug it out within two days; Berlin's Spandau Citadel faced years of bureaucratic hurdles to get it for an exhibition. 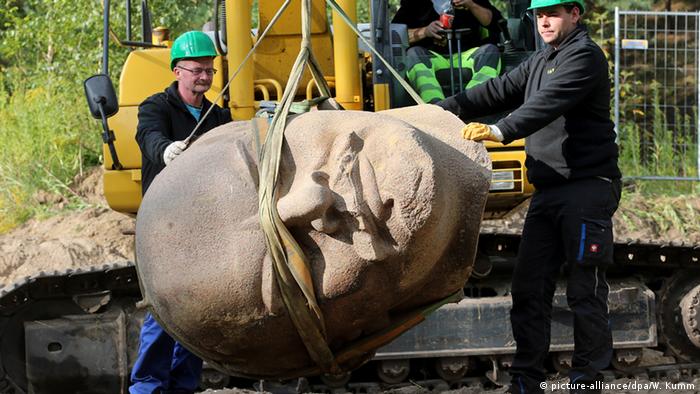 Statues of Lenin have been overlooking the smallest Ukrainian villages for decades. Over the last two years, activists have spent many nights dismantling hundreds of monuments to the leader of the Russian Revolution, and now a law banning all communist symbols is dividing the population.

If the issue is obviously still very sensitive in a country torn by conflict with Russia, one could think that Berlin would be able to calmly deal with its own weighty version of Lenin, 25 years after the fall of the Wall.

That's at least what Andrea Theissen, director of the Spandau Citadel, assumed when she decided to include the Lenin monument in the exhibition "Unveiled. Berlin and Its Monuments." However, the series of obstacles she had to deal with, she says, demonstrated that "this was not necessarily the case."

It would take years to unearth this monument - and it disappeared quickly.

In the 1996 short film "The Book of Lenins," an American photographer gets a contract to make a picture book about Lenin monuments. But every time he travels somewhere, it's already too late: The statues have already been taken down.

For the American filmmaker Rick Minnich, his fake documentary was a way to depict the incredible pace of transformations occurring in the 1990s in the former Soviet bloc: History was changing faster than he could even get there.

In Berlin, the 19-meter-high Lenin statue was taken down during the only year Minnich had been back in United States since he had moved to Berlin.

Despite protests and heavy debates against its demolition, the monument was broken down to 129 pieces. The most physically and symbolically important part of the statue, Lenin's 3.5-ton head, was carried away on November 13, 1991.

With the help of a photographer who had documented the burial of the dismantled monument in a forest in the Köpenick district of Berlin, Rick Minnich and his film crew dug around until they located the head, which makes for a scene of surreal archeology in his film.

Fast-forward to 2009. Andrea Theissen and a team of scientific advisors started researching for the exhibition of vanished monuments they were planning for the Spandau Citadel in Berlin, one of Europe's best-preserved military fortresses from the Renaissance.

"We find these monuments particularly interesting because they reveal so much about the political history of our city and of Germany. We are showing them with all the traces left by history. They are therefore not only symbols for specific periods; they also show how society dealt with these representations afterwards," says Theissen.

At the heart of the exhibition is the series of monuments that bordered the Siegesallee ("Victory Avenue") during the first half of the 20th century. Many of these statues depicting royal figures from Brandenburg and Prussia were damaged during World War II. 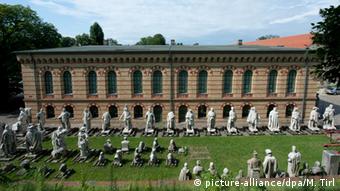 The ongoing exhibition also includes monuments created under Nazi rule. But the organizers did not need to debate about showing a statue of Hitler: Third Reich sculptures would promote National Socialist ideals instead of depicting leading figures. Arno Breker's "The Decathlete," included in the show, is a typical example of this.

Among all these monuments, the buried Lenin bust was an obvious exhibit, because "it distinctly symbolizes the state policy of East German monuments," says Theissen.

Over two decades after its disappearance, the Lenin monument is still "associated with emotions for many people," she adds. Throughout their research for the exhibition, they interviewed people who lived near it, in the Berlin district of Friedrichshain. Some say they still feel something is missing, while others associate Lenin with the repression they suffered in East Germany.

But beyond the emotional attitudes of the population towards the figure of Lenin, Theissen was unexpectedly burdened with years of political obstacles.

Should Lenin's head be separated from the rest?

In August 2014, the director of the Berlin state office for the protection of historical monuments, Jörg Haspel, stated that the head should not be shown separately from the rest of the monument.

Yet it would have been nearly impossible to puzzle back together Lenin's 129 scattered pieces. A reconstitution of the colossal monument wouldn't have fit in the nine-meter-tall building either. 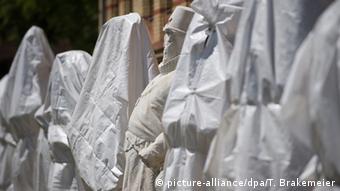 Free at last: an uncovered statue of John Sigismund, Elector of Brandenburg in the early 17th century

Such resistance to the project was based on misunderstanding, according to Theissen. Some people "feared they would put Lenin on a pedestal" and others believed that showing his head only would equate to "exhibiting a scalp." Yet she says they will be presenting the monuments in a very sober way, highlighting the historical context of these pieces.

The state officials also claimed they couldn't locate the statue anymore. "The story came out about a year ago. The Senate said they weren't sure where it was. So as a joke, I wrote a letter to the mayor, to [Klaus] Wowereit back then, and offered my help to find it," says Rick Minnich. "A couple of weeks later I got a polite response saying, 'Thank you for your offer, we'll get back to you if we need any help.' I think they knew where it was all the time."

Then came the lizards

Reflecting another great concern, environmental groups almost blocked the excavation works, too. In January 2015, the organizers of the exhibition found out that a colony of endangered sand lizards were living right above Lenin's buried head.

They got biologists involved, and it was decided that the lizards would need to be resettled after their hibernation period before the excavators could start rumbling.

It would be easy to see this as yet another political hurdle to further compromise the materialization of the project. Yet Theissen refuses to see any conspiracy theory here, explaining it was to be expected, as many real estate developers at the outskirts of the city had also been confronted with such issues.

"Nature conservation laws are perhaps too strict," she admits, "but we nevertheless decided to conform to them."

Red tapes adds to the suspense

Lenin will finally be sent to the citadel on September 10. Theissen believes that the whole six-year-long process and public discussions "make the exhibition even more interesting."

The series of hurdles will also be shown in a temporary exhibition accompanying the reopening of "Unveiled. Berlin and its Monuments."

Filmmaker Rick Minnich, who avoided the whole bureaucratic process to get to the head almost 10 years ago, is also captivated by the fate of the red granite Lenin: "I think it's silly that they buried it in the first place. But it's great that they're officially digging it up and putting it on display. The head is buried on its side, so it's like he's sleeping now, and that's how it's also going to be exhibited. So I think that's fitting symbolically: It's just like the remains of socialism."

Guo Xiaolu: language, exile and her new book 'I am China'

Language is a matter of survival, says Chinese-British author Guo Xiaolu, ahead of the International Literature Festival in Berlin. She tells DW about writing in English, and why she thinks refugees are good for Europe. (09.09.2015)