Two roadside bombs have struck a convoy carrying Iraqi families fleeing the self-styled "Islamic State" in the town of Hawija. The attack comes as the Iraqi forces, backed by US-led air power, are driving toward Mosul. 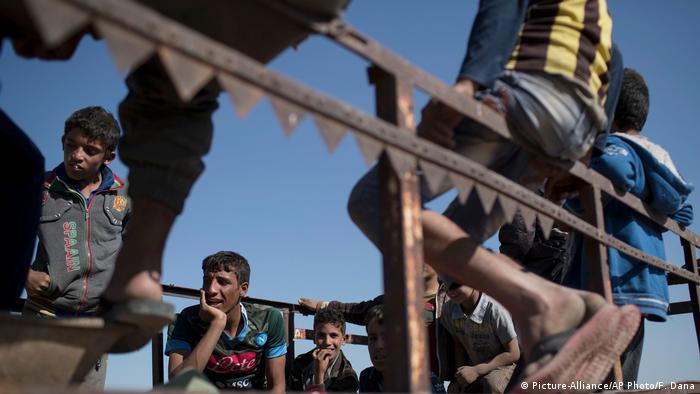 'IS' terrorizes civilians in Mosul

As the anti-IS coaltion moves in on Mosul in northeren Iraq citizens in the besieged city are being abused as human shields by "Islamic State" militants. Resistance is dealt with harshly; not even children are safe. (04.11.2016)

Iraqi troops advanced into eastern Mosul in the third week of the operation to recapture the city occupied by the self-styled "Islamic State." The US-led air coalition is carrying out airstrikes and directing artillery. (04.11.2016)

The bombs destroyed a truck carrying people from Hawija, about 120 kilometers (75 miles) south of Mosul, as they were being taken to the town of Al Alam near Tikrit on the Tigris River. Authorities said as many as 26 people were killed, most of them civilians fleeing the fighting as IS digs in near the city of Mosul. Pictures published on social media accounts linked to Iraq's Defense Ministry showed blackened corpses next to the twisted metal remains of the truck.

Most of the dead were from displaced families, authorities said. A policeman in a vehicle escort was also reportedly killed.

The explosion took place on Friday, as the convoy from the IS-held town of Hawija was moving away from the fighting around Mosul, where Iraqi special forces - backed by US-coordinated airstrikes and artillery attacks - are attempting to recapture the city from "Islamic State" fighters.

US troops have been accompanying and advising Iraqi forces in fighting on the eastern edge of Mosul since Baghdad launched its assault toward the city more than two weeks ago.

New satellite images show that "IS" militants in Mosul have set up defenses designed to bog down advancing forces. The images taken Monday and made public on Saturday by Texas-based private intelligence firm Stratfor, show rows of concrete barricades, earthen berms and rubble blocking key routes leading to the core of the city. The intelligence firm said these defenses "will pose a substantial tactical challenge" to Iraqi forces as they make their way toward the heart of the city.