Has the Arab Facebook revolution lost steam? | World | Breaking news and perspectives from around the globe | DW | 04.05.2012

Are social media and the Internet as relevant today in Arab countries as they were at the height of anti-government protests? Online activists spoke out on the issue and more at the Berlin blogger conference re:publica. 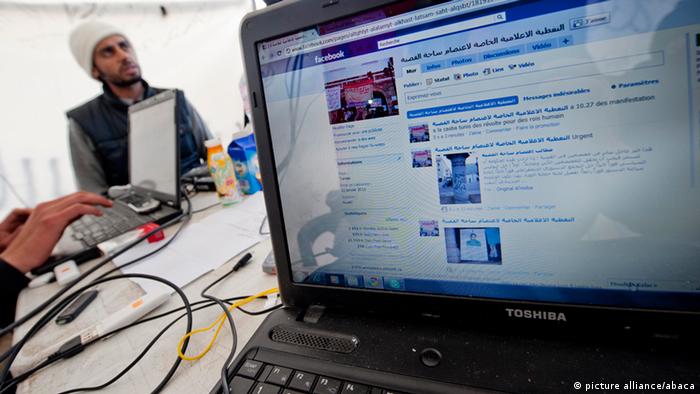 The "Arab Spring" in Tunisia, Egypt and elsewhere relied heavily on the Internet and social media to organize and accelerate protests against dictatorial regimes. But do the online tools play an equally important role in anchoring democracy in these countries?

"The revolution has shown that the Internet can be a spark to set things in motion," Tarek Amr, an Egyptian activist said. "But to build a democracy, you need other means," he added. The passionate Egyptian blogger witnessed the toppling of President Hosni Mubarak in February last year and even contributed to the protests that led to the event.

Amr was among the guests on a Deutsche Welle panel at the Berlin blogger conference re:publica. It's an international event that doesn't just draw geeks and tech fans but also invites political thinkers and activists to speak about current debates.

So, has the much-touted "Facebook Revolution" in the Arab World lost steam? How has the Internet changed politics and how do political developments impact what's happening online and in the media?

These were some of the questions addressed by a lively discussion, hosted by DW editor Robert Mudge. It focused on the situation in Egpyt, Tunisia and Syria. The three very different countries are also witnessing a rapid change in their respective media landscapes. 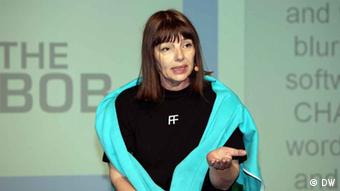 Claire Ulrich has been following media developments in Tunisia

Claire Ulrich from the international blogger network "Global Voices" said citizen journalism enabled by social networks such as Twitter and Facebook had by no means petered out after the social upheaval and protests.

Ulrich has been following events in Tunisia, especially, very closely. "The traditional media there were earlier steered from the presidential palace," Ulrich said. "Now the country has come to a tipping point - the question is what will be published in future?"

Ulrich said she found it encouraging that journalism training workshops were already conducted in a few Arab cities so that young activists could get basic knowledge for their activities as "citizen journalists."

They already play an important role in Tunisia. In February, the Tunisian Minister for Human Rights, Samir Dilou, triggered controversy when he said in a television interview that homosexuality was a perversion that needed to be treated medically. Citizen journalists responded with a flood of protests - first online and then on the streets.

Claire Ulrich said she had huge faith in Tunisia's cyber activists. "They're still working online. But, who knows, maybe one day they'll become the new newspaper journalists in Tunisia."

A funeral as a live stream

A different media story is unfolding in Syria. Laila Nachawati, a Syrian blogger, said the media is still as tightly controlled as it has been in the past decades and the state media outlets often present their own version of reality.

"They show a parallel world in Syria where nothing happens, where people eat ice cream on the streets," Nachawati said. "Sometimes, they show terrorist attacks but you often see that they are bad fakes because they make mistakes," the blogger said. "They let people operate in front of the camera and then you see how they stand up and go away though they've allegedly been injured. Nobody believes it anymore!" 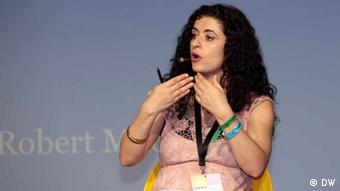 Laila Nachawati said the Internet showed a completely different side of Syria. An increasing number of online activists in the country risk their lives by uploading demonstrations or funerals as live streams on the web. But that poses problems too, Nachawati said.

"It's really difficult to be sure which information is reliable," she said. But Nachawati pinned the blame not on citizen journalists but the government, who she said did not allow foreign journalists into the country.

In Egypt too, the role played by online activists is far from losing importance, blogger Tarek Amr said. They often offer different material than the mainstream media, he added. They don't just bring stories that grab attention, are good to market or are simple to tell. "They (online activists) bring everything because their own life is at stake and they doggedly show it," Amr said.

Apart from a no-holds-barred portrayal of events on the ground, the Internet is indispensable in Syria in bringing people together, Nachawati said. 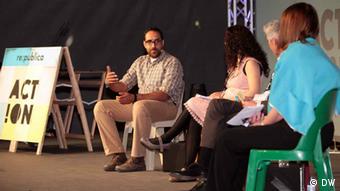 Egyptian blogger Tarek Amr on the stage at re:publica

"We citizens have experienced a wave of solidarity - from country to country. That unites and welds activists together. The communication via the Internet has contributed to that," Nachawati said. "The expression 'social network' is understood literally - people who unite, who overcome political borders."

Tarek Amr said the same holds true for Egypt too. "The most important thing that the Tunisians gave us in Egypt was hope," Amr said. In Tunisia, according to Claire Ulrich, the Internet has spawned life-long links - between countries and people.

It seems virtual reality has created an ideal base for political work to build on.

Guerilla Internet: Using the net to fight its own dominance

In Bangladesh, less than 15 percent of the population has electricity - a reality that confirms the 'Digital Divide.' But Dr. Activist Shahidul Alam argues that technology in itself is not the answer. (04.05.2012)