He fought Hitler with slogans and leaflets; that cost him his life. On September 22, the founder of the White Rose movement Hans Scholl would have turned 100. A look back at the famous resistance group against Hitler. 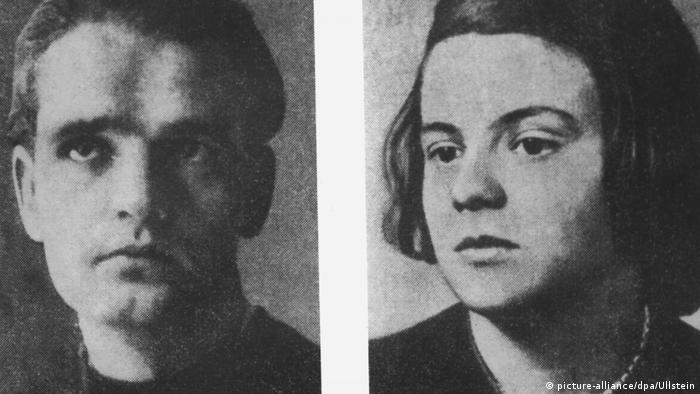 "Freedom!" Hans Scholl painted this word in large letters with black tar paint on the walls of the University of Munich — four times.

He was a member of the White Rose movement, aiming to overthrow the Nazi regime. The small group of students became one of the most famous resistance groups against Adolf Hitler's regime.

In the night of February 3, 1943, Scholl and another medical student, Alexander Schmorell, were walking through the dark streets. They wanted to post as many leaflets as they could throughout Munich.

They also had tin template for their graffiti stating "Down with Hitler" with a crossed-out swastika. But the Gestapo was already on their tail.

Hans Scholl was 14 years old and lived with his family in Ulm when Adolf Hitler came to power in Germany in 1933. Like his younger sister Sophie, he was initially fascinated by National Socialism. Against the will of his liberal father, he engaged in the Hitler Youth and hoped to pursue a career in the Wehrmacht.

Facing a system of unconditional subordination and increasingly restricted freedom, Scholl quickly became disillusioned with National Socialism, and turned back to his Christian values.

As a medical student in Munich, he came in contact with other critics of the regime in 1939.

During a semester break, he experienced the horrors of the war firsthand as a paramedic on the front. That convinced him to raise his voice against Hitler.

They secretly printed pamphlets in which they denounced the murder of 300,000 Jews and called for resistance, appealing among other things to renounce "national socialist subhumanism." They sent their letters to the intelligentsia and distributed them in Munich and various other cities in southern Germany and Austria.

The sixth leaflet would be the last for Hans Scholl and his colleagues.

On February 18, 1943, the Scholl siblings entered the University of Munich with a suitcase filled with some 2,000 leaflets, which they distributed throughout the university. As Sophie Scholl flung her last stack of leaflets from the atrium, the janitor caught her and delivered her and her brother to the Gestapo.

During trial, Hans Scholl tried to take as much blame as possible to protect his friends.

Four days later, on February 22, 1943, the infamous Nazi People's Court condemned Hans and Sophie Scholl as well as Christoph Probst to a death sentence. They were executed by guillotine that same day. Hans Scholl was 24 years old. His last words just before being executed were: "Long live freedom!"

The vintage-style propaganda posters in Washington, DC take aim at white supremacism, racism – and Donald Trump. A daring act of resistance, or an insulting slur on the US President? (18.09.2017)

Franz J. Müller was part of the White Rose resistance group that called for active opposition against the Nazi regime. In an interview with DW he recalls what happened and why the White Rose is still significant. (18.02.2013)

Students Hans and Sophie Scholl were arrested and executed 70 years ago. The students and their friends had distributed leaflets calling on people to resist the Nazi regime. Today, they remain symbols of moral courage. (18.02.2013)