It's official: Hanover schoolgirl Lena Meyer-Landrut will represent Germany in the Eurovision Song Contest this year, after winning national television casting show "Our Star for Oslo." 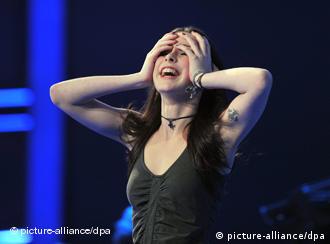 Come April, 18-year-old Lena Meyer-Landrut will be busily studying for her high school finals alongside most of her peers. But just a few weeks later, the Hanover teenager will have an altogether different challenge to prepare for: singing for her country at the 2010 Eurovision Song Contest in Oslo.

"I'm shaking all over. I didn't think it would hit me like this. This is really bad, it's awesome," said a teary Meyer-Landrut after the results of the telephone vote were announced.

The young singer earned her ticket to Norway through the national televison casting show "Unser Star fuer Oslo" ("Our Star for Oslo"), in which she was the youngest contestant. The show pitted singers from around the country against one another and each week, viewers would vote for the contestant they most wanted to represent Germany at the Eurovision Song Contest. On Friday night Meyer-Landrut’s performance of "Satellite" saw her crowned winner of the show, edging out the 18-year-old runner-up Jennifer Braun.

Odds on her side

Despite her youth, Meyer-Landrut has long been touted as a favorite to win. She attributes her success to her determination to be herself on screen rather than adopt a false persona, and told Deutsche Welle that fans can expect to see more of this authenticity when she takes to the Eurovision stage in May.

"I do think [my performance in Oslo] will look like the performances here," she said. "I’m going to be fresh and funny as ever, like I’m always being … I hope that will be good."

Meyer-Landrut said that when it comes time to live out her dream of performing at Eurovision, she hopes to avoid the exaggerated kitsch that has come to define the song contest over the years: "The old tradition will not be in my [performance]."

Meyer-Landrut is no stranger to the spotlight, having danced for many years. Throughout the preliminary casting show "Our Star for Oslo," Meyer-Landrut impressed audiences and judges alike with her onstage ease and versatility. Jury president (and former Eurovision contestant) Stefan Raab commented, "You are a chameleon, a gazelle and a nightingale all at once."

It is a flexibility reflected in her musical taste: The young singer’s favorite tunes range from Jack Johnson’s breezy pop to Yann Tierson’s beautifully eccentric compositions. Though she doesn't play a musical instrument, Meyer-Landrut has said that she would like to learn piano and guitar.

Since filming for the casting show began in February, Meyer-Landrut has had little time for hanging out with friends, though they remain an important source of stability for her. "They support me, and it’s so good to have them here," she said, after a post-show huddle with a group of close friends.

These past few weeks, a typical day has meant at least two or three hours of rehearsing a day - and Meyer-Landrut will likely need to double these efforts in the lead-up to Eurovision. Despite this, she continues to make time for her studies. She says she must often shut herself away with her books in order to escape the distraction of endless rehearsals and performances.

"Going to school is very important because I’m doing my exam, and I try to learn every day a bit," she said. "But it’s not that easy because we do have to learn the [lyrics] and the songs, the melodies; I’m quite tired."

But despite the grueling schedule, she said, the opportunity to live out her passion makes the hard work worthwhile: "When I do sing, it’s like everything’s away."

As the Eurovision final kicked off in Moscow, Germany's entry in the European song contest has been ordered to show less cleavage. (16.05.2009)

Germany blames self, others for Eurovision fiasco

Germany's Eurovision entry was No Angels, but No Points would have been more accurate. After getting a goose-egg from 40 of 42 countries, Germans are asked why they can't do better at Europe's kitschy song contest. (28.05.2008)