Halal ham is broadening horizons | Europe | News and current affairs from around the continent | DW | 18.07.2015

Tasting authentic Spanish ham is often a key part of any tourist's visit to Spain. But it's a treat observant Muslims - who don't eat pork - have been unable to enjoy. Now, though, that's about to change. 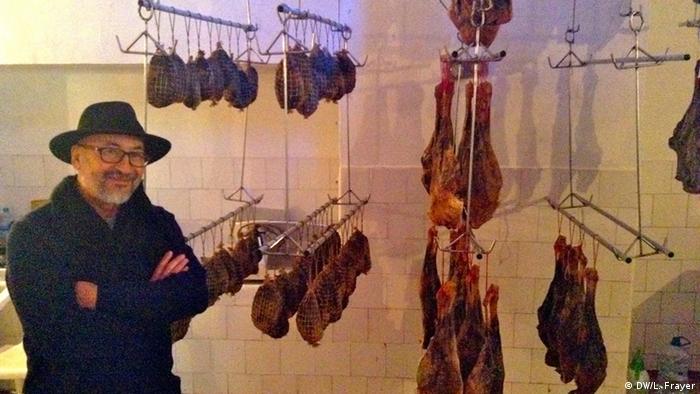 Deep in the mountains of southwest Spain, a ham festival is underway. Music from traditional Spanish guitars fills the air in the town of Cumbres Mayores, in the heart of Spain's most authentic ham-producing region. Fat black pigs roam free, eating acorns scattered all around the area.

"Curing ham goes back to the 17th century here. We worship the patron saint of pig slaughterers, San Antón," explains Jesus Sanchez Vazquez, the councilman in charge of cultural affairs. The town, which is 700 meters (2296.5) above sea level, boasts the qualities needed to perfectly dry and cure the ham, known as "jamon iberico de bellota."

"It melts in your mouth, it's so smooth. It tastes and smells like the countryside here," he says proudly.

But that's a taste that Muslims, like local resident Faysal Mrad Dali, will never be able to experience. 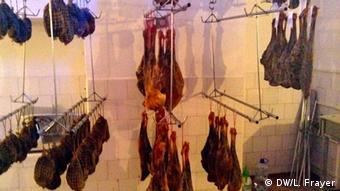 Meat is cured for the traditional six months

"The first time I came with my family to Spain, to Andalusia, I said, 'Why don't the Muslims have this?'"

So he set out to create it. Dali moved from Belgium to Cumbres Mayores a few years ago, and started making Spain's first halal ham - which is actually lamb and sometimes beef.

The animals are slaughtered according to Muslim tradition, and the meat is cured in the most traditional Spanish method, for a minimum of six months, just like pork. Dali uses fresh local spices, including thyme, paprika and oregano.

At his factory, Dali proudly shows off the racks of cured lamb legs, lamb pate and beef sausages. He slices some to taste. It looks and tastes exactly like pork, which is his goal, but also a potential problem. Some Muslims might refuse to believe this isn't pork, so all of Dali's products have a huge halal certification sticker on the packaging. 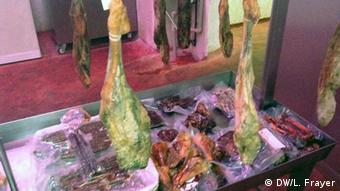 In a taste test, many people think that 'Halal ham' tastes similar to pork

He sells his products online in Spain and across Europe, including at restaurants near Granada's Alhambra, the palace of Muslim kings who ruled Spain in the Middle Ages.

"Spain has a very strong Islamic history," explains Bilal Domah, the director of the annual Halal Tourism Conference, held last year in Spain. "Over the last few years, there has been a big growth in Muslim tourists. And when it comes to tourism, food has a real role to play in promoting that tourism."

Domah says halal tourism is a nearly $200-billion market (184.6 billion euros), and it's pushing the boundaries of traditional Muslim products around the world.

"For example, at the conference there was a company showcasing halal champagne. And that actually took off quite well! A lot of people were trying it, tasting it, apparently it tastes very similar to the real thing." 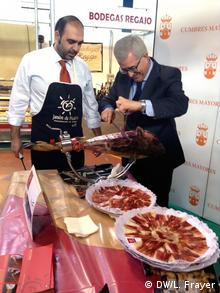 Spain is famous for its food

Halal products like Dali's lamb "ham" are one way Spain is accommodating an influx of Muslim tourists, many of them Gulf Arabs with money to spend in Spain's crisis-hit economy. But Dali says at first, he got some strange looks in this traditional, rural corner of Spain.

"I came here and I found I am the only Muslim in the village. People say, 'es un poco loco', he's a bit crazy!"

But he didn't take heed about what people might think, and set out to pursue his goal.

"This has been a dream for me, as a Muslim. I'm living and making my product in a region where Muslims, Jews and Christians have a history of living and eating together for centuries."

And they can carry on doing so, it seems, with the help of halal ham and also kosher ham, another new product on the market made from duck or goose. Both products are helping traditional Spanish ways of cooking reach an ever wider market.

The Muslim community around the world has begun to mark the end of Ramadan. After a month of fasting, followers of Islam will now start celebrating the festival of Eid-al-Fitr - not all, however, on the same day. (17.07.2015)

Drunken tourists staggering on the beach of Barcelona, loud louts shouting down the alleys of Lisbon. Tourism in many popular European cities is attracting criticism and some towns are concerned about their image. (02.07.2015)

The Netflix hit, "The Club" revisits a forgotten chapter in Turkish history, a time when the city of Istanbul had a flourishing multicultural and multi-faith society, including a Jewish community.