After a 7.2 magnitude earthquake hit Haiti, the disaster's death toll more than doubled in one day. Rescuers are still searching for hundreds ahead of an impending tropical storm. 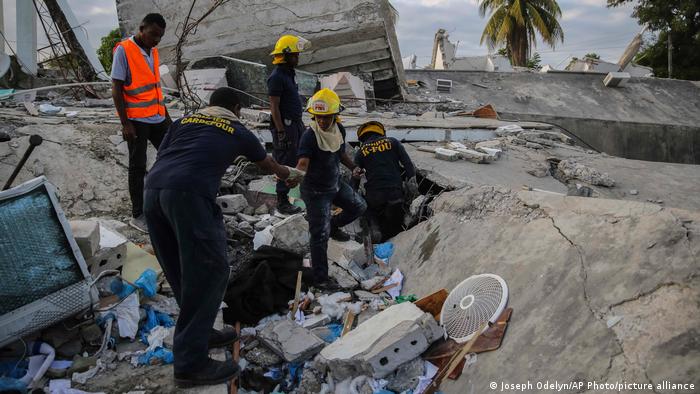 The quake flattened hundreds of homes and buildings

Hundreds of people are still missing and more than 2,800 were injured, Haiti's civil protection services added.

Sunday's figures are a tragic rise in the death toll, which was at just over 300 on Saturday.

Rescue workers are racing against the clock to pull survivors from the rubble of destroyed buildings as Haiti braces for a tropical storm.

What help is Haiti receiving?

The US Agency for International Development (USAID) has sent a 65-person urban search and rescue team to Haiti, as well as 52,000 pounds (23.6 tons) of tools and medical supplies, the agency's chief Samatha Power said on Twitter.

Pope Francis called on nations to send quick aid in his Sunday blessing in the Vatican. "May solidarity from everyone lighten the consequences of the tragedy," he said on Twitter.

"My special sympathy goes to the relatives of the victims and to all those who have lost their belongings. To those injured, I wish a speedy recovery," she said in a statement issued on Sunday.

A state of emergency was declared in Haiti after what the government described as a "dramatic" earthquake — also felt in Cuba and the Dominican Republic.

An approaching tropical storm is likely to complicate rescue efforts. According to the US National Hurricane Center, Tropical Storm Grace is forecast to bring heavy rainfall over Haiti on Monday. Flash flooding is also a possibility.

Hundreds of Haitians lost their homes in the earthquake and several people had to sleep in the open on Saturday night.

The disaster brought memories of the magnitude 7 quake in 2010 that killed tens of thousands of people.

The country has also been mired in political turmoil since the assassination of President Jovenel Moise.