A veteran Turkish minority party leader in Bulgaria has escaped unharmed after a gunman took close aim during a televised speech in Sofia. Guards tackled the 25-year-old assailant whose gun did not discharge. 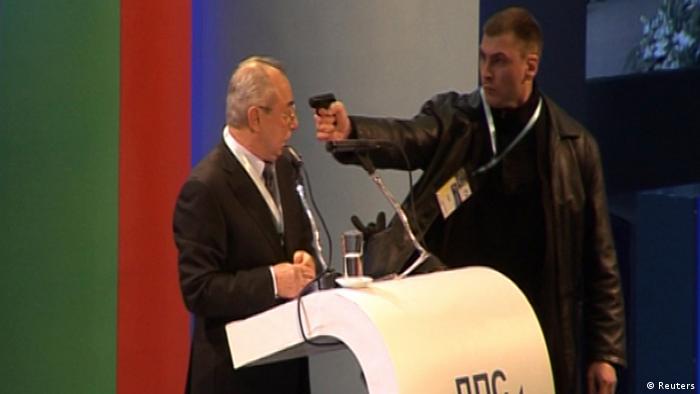 Television footage on Saturday showed the assailant emerge from the side of the podium and point a gun into the face of Ahmed Dogan, the leader the Movement for Rights and Freedoms (MRF).

It was a junior partner in Bulgaria's previous Socialist-led cabinet.

The liberal MRF party represents ethnic Turks and other Muslims who comprise 12 percent of Bulgaria's population.

"Ahmed Dogan is in good health. Everything is under control," said another MRF official, Ceyhan Ibryamov.

Police said they had arrested the gunman, who is from the Black Sea town of Burgas. He was also carrying two knives, they said.

The handgun was a gas pistol, according to the news agency AFP.

The motive for Saturday's incident during the MRF national party conference was unknown.

Dogan, who has led the MRF for 25 years, had been widely expected to announce Saturday that he was stepping down.

Although attacks on politicians are rare in Bulgaria, in 1996 former prime minister Andrei Lukanov was found shot dead near his home in Sofia.