Gun control and firearms possession in Germany | Germany | News and in-depth reporting from Berlin and beyond | DW | 24.01.2022

Shootings are relatively rare in Germany, a country with some of the strictest gun laws in Europe. DW looks at Germany's gun ownership laws. 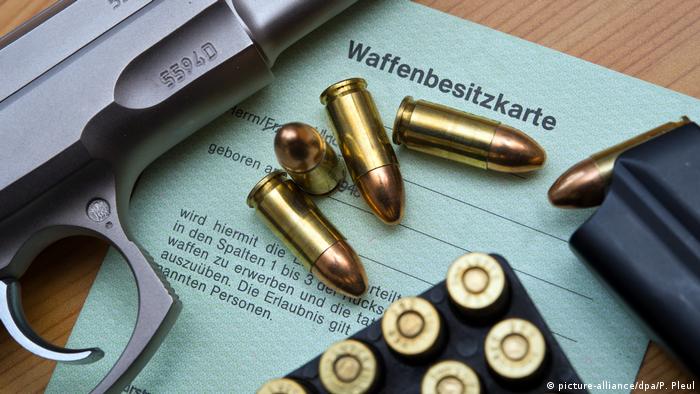 According to the Weapons Act, you need a weapons possession card (Waffenbesitzkarte) to own or buy a firearm and a weapons license (Waffenschein) to use or carry a loaded firearm. This means collectors, for instance, only need the first. Hunters don't need a weapons license as long as they have a hunting license (Jagdschein) and only use their guns for hunting game.

A weapons possession card allows gun owners only to "transport" a firearm, rather than carry it. That means it must be unloaded and inside a locked case when taken out in public.

A license to carry a gun, or Waffenschein, is only granted in rare cases: Essentially when the applicant can prove that he or she is in greater danger than the general public, and that carrying a gun will keep them safer. German law has no provision stipulating whether a gun must be concealed or loaded in public or not.

There is also a minor firearms certificate,(Kleiner Waffenschein) which is easier to obtain, and which is needed to carry lower-powered weapons, such as starting pistols, flare guns, or anything that can only shoot blanks or irritants. Low powered air-guns (below 7.5 joules) also come under this definition.

Altogether, the costs for an application, including the required insurance, can run to around €500 ($540).

What kinds of guns are legal in Germany?

German law makes a distinction between weapons and war weapons, with the latter listed in the War Weapons Control Act.

In Germany, it is illegal to possess or use any war weapons. These include all fully automatic rifles, machine guns (unless antiques from World War II or earlier), or barrels or breeches for such weapons. Pump-action shotguns are also banned under the Weapons Act. Some, though not all, semi-automatic weapons are defined as war weapons.

Who is allowed to carry guns in Germany?

Applicants for a German gun license must

2) have the necessary "reliability" and "personal aptitude,"

5) have liability insurance for personal injury and property damage of at least €1 million ($1.1 million).

How do applicants demonstrate 'reliability' and 'personal aptitude'?

Local authorities are responsible for processing gun license applications, and therefore verifying reliability, personal aptitude, and need. Depending on where the applicant lives, the competent authority could be either the public order office (Ordnungsamt) or the police.

Amongst other criteria, the law says that applicants are deemed unreliable or lacking personal aptitude if:

In addition, anyone under 25 applying for their first gun license must provide a certificate of "mental aptitude" from a public health officer or psychologist. 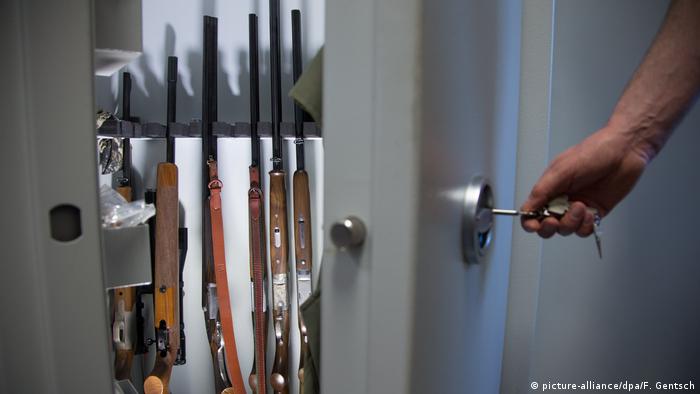 German gun laws also stipulate how guns can be stored

How do applicants demonstrate 'specialized knowledge'?

Applicants for a gun license must pass an examination or have undergone some training to acquire a gun. State examinations cover the legal and technical aspects of firearms, safe handling, and shooting skills.

Specialized knowledge can also be verified with other examinations, as long as they cover the same areas: These include hunting license examinations, gunsmith's trade examinations, or full-time employment in the gun or arms trade for three years.

The completion of certain training courses involving firearms, which conclude with an examination, are also recognized as specialized knowledge.

In addition, officially-recognized shooting associations can also carry out their own examinations.

How do applicants demonstrate 'need'?

People who show they are unusually likely to be the victim of a crime can also be deemed as having a need to carry a firearm.

Members of shooting associations and clubs can also demonstrate the "need" for a gun license if they submit a certificate from an association of sports shooters confirming that they need these weapons in order to maintain their tradition.

This article was first published in 2020.

An earlier version of this article stated that hunters in Germany must carry a gun license (Waffenschein). In fact, they need a hunting license (Jagdschein). That has now been corrected.

The Czech Republic had challenged the ban on semi-automatic rifles for private use. But measures taken by the European Parliament and the European Council do not breach legal principles, says the EU's top court. (04.12.2019)

The new regulations include greater powers for authorities to check in on gun owners. However, some opposition politicians called for more action on homemade firearms after the anti-Semitic attack in Halle in October. (13.12.2019)

The legal basis for firearm possession in the US is enshrined in the Second Amendment of the Constitution. But how are guns regulated? DW looks at who can buy and sell them — and how one loophole undermines gun control. (20.01.2020)

Bavarian authorities collected nearly 15,000 weapons during Germany's year-long weapons amnesty to reduce the number of illegal weapons. However, the amnesty was not as successful as the one in 2009. (07.08.2018)

Police in the southern Germany city have said a large operation is underway at a university in Heidelberg. A single shooter reportedly opened fire inside a lecture hall, resulting in several injuries.