Guido Westerwelle: Resurrecting Germany′s liberals | News and current affairs from Germany and around the world | DW | 27.09.2009

Guido Westerwelle has led his pro-business FDP to the best election result in the party's history. The FDP is set to govern with Chancellor Merkel's conservatives in a center-right government. 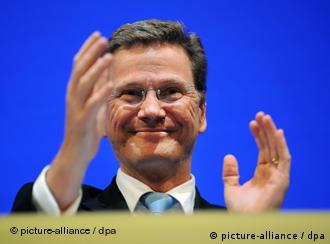 Westerwelle has led the FDP since 2001

Westerwelle was elected head of the liberal, pro-business Free Democrats (FDP) at a time when the FDP admittedly needed to open its doors to a new breed of voter and appeal to more than just business-focused professionals to stay alive. At 47, he was the party's youngest ever leader and first ever chancellor candidate. But success was not immediately forthcoming.

Under their new and relatively youthful leader, and armed with a fresh campaign tactic which embraced the "fun" side of politics, the liberals set an ambitious target of 18 percent for the 2002 federal elections. 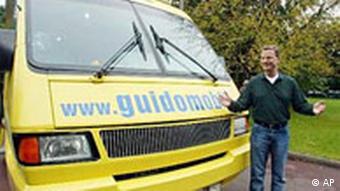 The Guidomobile was considered a political stunt gone wrong

Initially, Westerwelle's approach intrigued. His campaign schedule, which peaked with an appearance on Germany's "Big Brother" television show, was modern, fresh and even provocative at times. Westerwelle, who became known as the Spasspolitiker - the fun and games politician - even went so far as to turn up on a TV program with a giant yellow 18 on the soles of his shoes. He followed that up by driving to the Mannheim Congress Center for a party conference in a bright yellow bus nicknamed the "Guidomobile."

The tactic was designed to win over a public that was supposedly bored with the traditional two-horse race between the Christian Democrats (CDU) and Social Democrats (SPD).

But the campaign of "fun" failed to capture Germans' imagination, and the FDP finished with only 7.4 percent of the popular vote, less than half their original target. Many felt that the hype Westerwelle had created trivialized politics and covered up an election platform that was lacking in substance.

Westerwelle guided the FDP to an improved result of around 9.9 percent in 2005 elections, a fairer reflection of the party's popularity. But it wasn't enough to get the party into government with the CDU, which needed to pair up with the SPD to form a parliamentary majority. 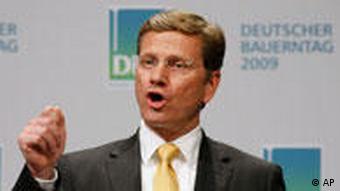 Westerwelle has shed his former complexion as the fun and games politician, adopting a more austere, FDP-means-business approach to the 2009 campaign.

"He is now a little bit more modest and conservative in his appearance," Werner Weidenfeld, a political scientist at the University of Munich, told Deutsche Welle. "The people want to have a serious partner in government, not just a humorous clown jumping around making a lot of jokes."

Westerwelle's new persona chimes better with German voters' expectations, Weidenfeld says, and it's a decisive factor in the FDP's success in polls.

Earlier in the year, the party was actually polling at around 18 percent, feeding off the backs of the SPD and CDU, which were shedding supporters like they were going out of fashion. Those figures have come back down to a more realistic 14 percent in recent months, but if the trend continues, the Free Democrats and Guido Westerwelle could be heading into government as junior coalition partners to the CDU, which is expected to come out on top in the election. It would be the first time the FDP has been in government since 1998. 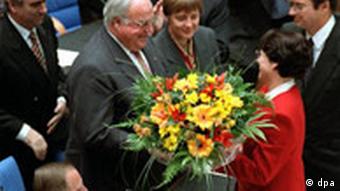 Westerwelle is tipped as first in line for the post of foreign minister in a CDU-FDP coalition, though he has sought to quash any speculation about his post-election future should a the two parties prevail. He has said that foremost in voters' minds was what a CDU-FDP government could achieve, not who was awarded which portfolio.

His greatest task in government, analysts say, will not be the upkeep of his portfolio, whatever that may be, but perhaps positioning himself to exert pressure on the much larger CDU to demand the tax system changes he and his party have been campaigning on since the election season began.

Mistrust inside the camp

But Westerwelle has many critics, including members of the Christian Social Union (CSU), the Bavarian sister party to the CDU, with whom the FDP would also govern. Recently CSU leader Horst Seehofer said he did not trust the FDP leader, fearing the liberals might opt for a coalition with the Social Democrats and Greens over a partnership with the CDU. 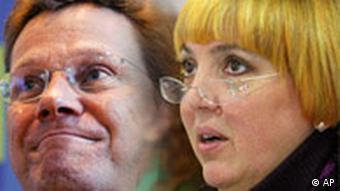 But former SPD parliamentarian and political scientist Nils Diederich told Deutsche Welle that an FDP-SPD-Green coalition would not bring harmony to German politics, and that Westerwelle knows this.

"There is no possibility of compromising between the Greens and the liberals," he says. "Guido Westerwelle wants and strives towards a coalition with the Christian Democrats."

A coalition between the Social Democrats and the FDP is out of the question, he says, adding that "Westerwelle has stated very firmly that he wants a new majority of the right-wing between Christian Democrats and the liberals. I think that this is not only a tactical but principled decision."

With opinion polls showing that many Germans have lost interest in the much larger SPD and CDU parties, Guido Westerwelle could be on the verge of resurrecting the FDP and avoiding another cold, four-year stint as default opposition leader.

The FDP: Kingmakers in waiting?

Thrust into the position of Germany’s opposition party by default, the center-right pro-business Free Democrats have been slowly gaining ground on their much larger political rivals and could soon be in power once again. (25.08.2009)

Germany's Free Democrats (FDP) have said they will hold off announcing plans for a coalition. FDP leader Guido Westerwelle says the Free Democrats are now keeping all options open. (17.05.2009)

Guido Westerwelle who was re-elected as leader of the liberal Free Democrats on Friday, has vowed to make tax reform the focus of his campaign to lift Europe's largest economy out of its worst slump in decades. (15.05.2009)