Alvaro Colom and most of his former cabinet have been arrested over major deals to overhaul the capital's public transport. Colom is one of three Guatemalan leaders currently facing graft allegations. 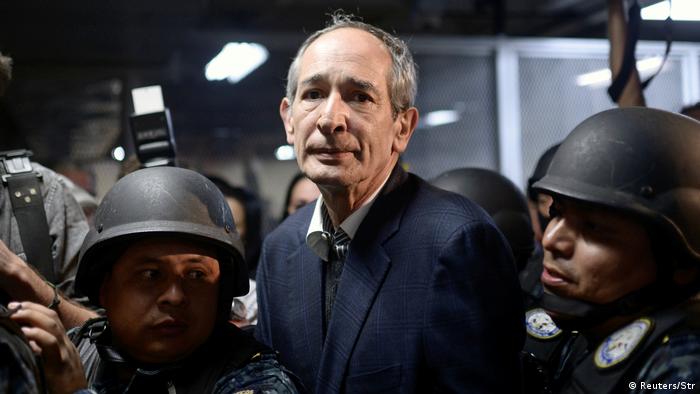 Colom, 66, was president of Guatemala from 2008 to 2012. He and several members of his cabinet have now fallen under suspicion for a dubious public transport deal in 2009.

In all, 10 arrests were made over fraud and embezzlement charges for the purchase of hundreds of buses ordered for Guatemala City. Four companies signed 25-year government contracts to operate the TransUrbano transport system, a transaction Colom's National Unity of Hope party tried to exempt from taxes.

More than half of ministers detained

The other suspects compromise nine people from Colom's 13-member cabinet, including the ex-ministers of education, defense, labor, health and the environment, who all signed off on the deal. The arrest of former finance chief Fuentes has placed extra strain on Oxfam, already reeling from sex abuse claims from its mission in Haiti.

The ex-leader was arrested at his home in an upscale neighborhood in the capital. He has denied any wrongdoing.

Colom follows a pattern of corruption charges against Guatemalan leaders. Colom's immediate successor Otto Perez is currently in jail awaiting trial for graft allegations, and the country's country president, Jimmy Morales, is facing claims of illicit campaign financing and attempting to expel a UN-backed prosecutor trying to put him on trial for fraud.

Guatemala's Congress refused to strip President Jimmy Morales of his immunity and allow him to face prosecution over campaign funds. Previously, Morales tried to expel the head of an UN anti-corruption team. (12.09.2017)