Germany's Green Party, which has enjoyed its most successful year ever in regional polls, is holding a conference to debate ways to return to government in the 2013 parliamentary election. 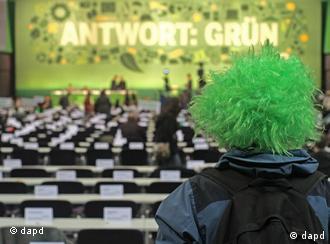 Green is the color to watch out for in German politics

Germany's opposition Green Party is riding high on a string of successes in 2011 and is now hoping to replicate it on a national level.

A strong run of local elections has given the Greens a presence in all 16 regional assemblies for the first time. The party scored its biggest triumph in the southwestern German state of Baden-Württemberg, an industrial powerhouse.

That's where the Greens, once known as a party of peaceniks and ecologists, ousted Chancellor Angela Merkel's Christian Democrats (CDU) earlier this year and installed their first state premier, Winfried Kretschmann. 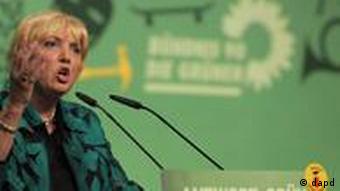 "We have shown that economics and ecology don't contradict each other," Green party co-leader Claudia Roth said at the beginning of the conference in the northern German city of Kiel.

A swipe at Merkel's government

Now the Greens are setting their sights on a return to the federal government in national parliamentary elections in 2013.

"The Conservative-liberal government must go, it has failed in all respects," Roth told delegates, referring to the current governing coalition of Christian Democrats (CDU) and Free Democrat Party (FDP).

Roth also took aim at the German government, saying it had failed to formulate a smart and visionary policy foreign policy. On the domestic front, she argued, the government was merely pandering to its voters.

Another remarkable turn for the Green agenda in 2011 was Chancellor Angela Merkel's about-face on nuclear power after the Fukushima tragedy in Japan.

With the decision for Germany to shut down all nuclear power plants by 2022, Merkel called for exactly what the Greens had demanded for decades.

The "greening" of German politics ended up boosting the Green's profile, giving them broad appeal in the mainstream.

Though the Green Party did approve Merkel's government bill on the nuclear phase-out, it is at pains to distinguish itself from the government on other issues.

The Greens are also calling for a higher tax rate on high incomes as well as other tax hikes.

The Greens are also expected to debate a recent challenge to their popularity from the Pirate Party, which swept into the Berlin Senate in a shock electoral success.

The Pirate Party, with its appeal to younger, internet-savvy voters, is considered a serious threat to the Greens.

Early in the conference, Roth shakily read out the names of ten, mostly Turkish victims, murdered by an alleged neo-Nazi cell. The story has made headlines across Germany.

"These were not kebab-killings," Roth said, referring to the term adopted by German media for the murders. "These were Nazi murders in Germany."

The Green Party is also discussing a renewed legal attempt to ban the far-right NPD party. Roth said she was in favor of a ban and urged intelligence agencies in Germany to drop the practice of using informants in the far-right scene.

The Green Party conference lasts through Sunday afternoon in Kiel.

Angela Merkel's nuclear turnaround has triggered a debate within the Green party about joining forces with Merkel's Christian Democrats in a future government. But the issue divides both parties. (14.06.2011)