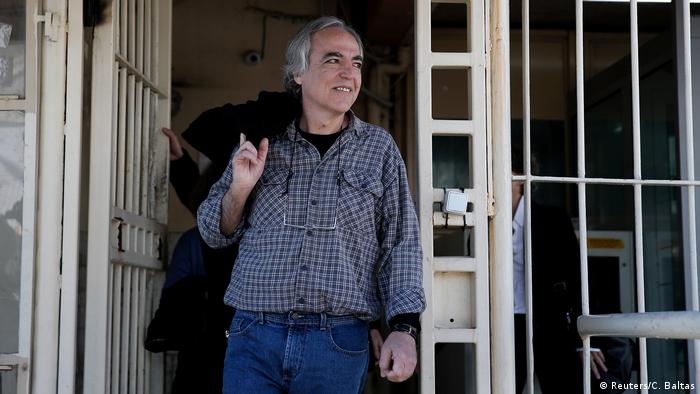 A notorious Greek assassin is back behind bars after 48 hours of freedom that sparked international outrage.

Dimitris Koufodinas, dubbed the "Poison Hand," returned to the Korydallos prison Saturday morning, 90 minutes ahead of his 12 noon deadline. Accompanied by his wife and son, he appeared relaxed and waved to the media. He said through his lawyer that he used the time outside of jail to reconnect with his family and work on plans for a beekeeping business, which he used as a front during his years as a hitman.

The 59-year-old is serving 11 life sentences plus 25 years for his role in 11 of 23 assassinations carried out by the now-defunct extreme left-wing militant group November 17.

The group's presence first became known in late 1975 after they murdered Richard Welch, the CIA's station chief in Athens. British military attache Stephen Saunders was the group's last victim, in 2000.

For 25 years the group carried out a series of assassinations that included diplomats and officials from the United States, Great Britain, Turkey and Greece. All three foreign countries condemned Greece for granting Koufodinas the two-day leave.

US ambassador to Greece Geoffrey Pyatt said it was an insult to victims and their families.

"I add my voice to those from across Greece's political spectrum deploring prison council decision to release a convicted terrorist, murderer & N17 leader," Pyatt said on Twitter.

In a Greek-language tweet, British ambassador Kate Smith likewise expressed London's "profound disappointment" and added that the embassy "shared" the pain of the victims' families.

And the Turkish foreign ministry said the decision had displayed "tolerance to a bloodthirsty terrorist" in "sheer disrespect to the memory of our martyred diplomats."

Book was a best seller

Kyriakos Mitsotakis, Greece's main opposition leader, whose sister's husband was among November 17's victims, said, "I speak as a shocked citizen who is witnessing this country's biggest terrorist, a remorseless murderer, given leave from prison."

In 2014, another jailed former November 17 member, Christodoulos Xiros, took advantage of his prison leave to go on the run. He had been planning terrorist attacks when police recaptured him a year later.

The liberal daily newspaper Kathimerini said Saturday that Koufodinas was able to secure leave because the Tsipras government had modified a law regarding conditional release.

Koufodinas is a former mathematician. He was convicted for the murder of Saunders in addition to the deaths of a US military attache, a US airman and two Turkish diplomats, among others. 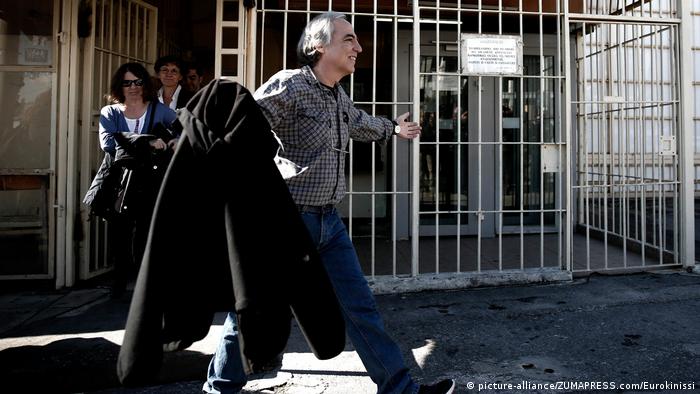 Koufodinas walking out of prison on Thursday, here and above

Koufodinas was arrested in 2002 but not before evading capture for several months by camping out on a secluded beach after other members of the group had been arrested. He subsequently turned himself in.

November 17 was named after an anti-junta student uprising. While in prison, Koufodinas wrote a best-selling book about his life inside the extremist group.