Meeting the head of the Eurogroup in Athens, the Greek finance minister said he would reject any cooperation with Greece's main international lenders known as the troika. His statement didn't go down well in Germany. 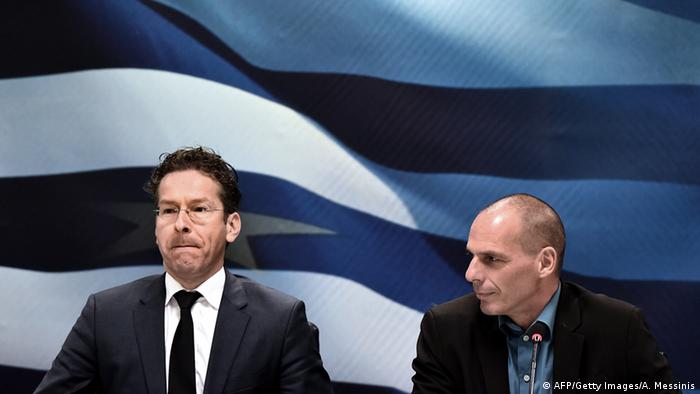 The head of the Eurogroup chairing eurozone finance meetings, Jeroen Dijsselbloem, on Friday met with top officials from the new Greek government in Athens to sound out their policies.

He was told bluntly by new Finance Minister Yanis Varoufakis that Greece was no longer willing to cooperate with the troika, that is its key lenders, the European Commission, the European Central Bank and the International Monetary Fund.

Varoufakis said his country was not asking for an extension of the existing bailout as it disputed the very wisdom of the program in the first place.

"It cannot be our first move to give up our stance on the troika by demanding an extension of the bailout program, which is rejected by the people," the finance minister said in a statement.

"Ignoring the compromises is not the road to follow," he told reporters at a news conference. He noted that Greece had gone through a lot of hardships in recent years to reform the economy and that progress had already been made. But he warned the government's current stance would endanger the advances made so far.

Germany once again rejected Greece's demands to be forgiven repayment of its rescue loans.

"The discussion about a debt cut or a debt conference is divorced from reality," German Finance Ministry spokesman Martin Jäger said in Berlin. He added that Greece was obliged to abide by the terms of its 240-billion-euro ($270-billion) bailout program agreed by previous governments.

"We're going to continue to work closely with the European Union, and that means engaging with the new political leaders in Greece to try to resolve these differences and get Greece and Europe and the global economy back on a path to growth and prosperity," he said.

Newly elected Greek Prime Minister Tsipras has quickly moved to implement his campaign promises to the Greek people. For European leaders, that is cause for serious concern. (28.01.2015)

Work culture: Why companies want employees back in the office 26.09.2022

Employers that want workers back in the office may want to gain advantages from in-person interaction that cannot be measured by productivity alone.