An Athens court has remanded the leader of Greece's Golden Dawn neo-Nazi party Nikolaos Michaloliakos and another party parliamentarian in pre-trial custody. They deny charges of running a criminal organization. 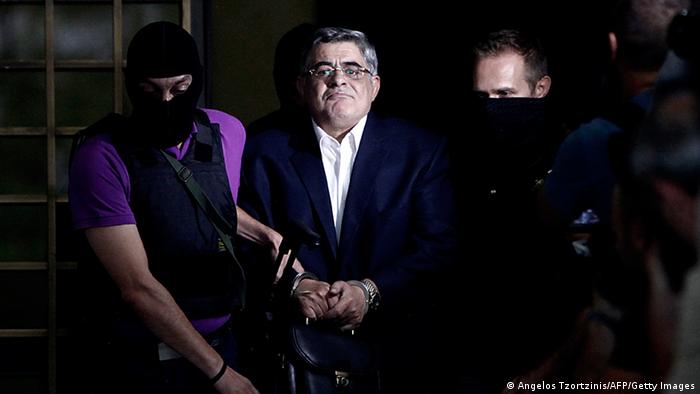 A Greek government crackdown following the murder of a left-wing rapper last month led to court appearances by five members of the neo-Nazi Golden Dawn party on Wednesday. Two of them, including its leader, were later remanded in jail.

Three others were conditionally set free and stormed out of the building during Wednesday's marathon court session, threatening journalists as they went.

Interior Minister Yiannis Michelakis insisted that the case was on track against the party which has long been blamed for violent attacks, mostly against immigrants.

"Their charges stand, the investigation is ongoing and the evidence is being gathered, Michelakis told Skai television.

Golden Dawn leader Michaloliakos, who was remanded to be held in Greece's high security prison, Korydallos, had been escorted earlier into the courthouse by armed police.

The fatal stabbing of a rapper has prompted mounting calls in Greece for the banning of the far-right party Golden Dawn. Civil servants remain on strike for a second day over planned job cuts wanted by creditors. (19.09.2013)

The party denies that it was behind the murder of the 34-year-old left-wing rapper Pavlos Fyssas in an outlying part of Athens on September 18..

A suspect arrested near the scene identified himself to police as being involved in Golden Dawn.

So far, Greek authorities have issued 32 arrest warrants in the case, including two for police officers suspected of having ties to criminal activities linked to Golden Dawn.

On Wednesday, police arrested a former police station chief in an Athen's immigrant district where systematic attacks on migrants began four years ago.

Rights groups and medical charities had long warned of an increased frequency of attacks attributed to Golden Dawn members or supporters.

Golden Dawn entered the 300-seat Greek parliament with 18 members for the first time last year, partly on a wave of public discontent over recession and austerities required by international lenders.

The coalition government of Prime Minister Antonis Samaras recently vowed to clamp down on Golden Dawn.