Greek economy is likely to contract beyond forecasts | Business | Economy and finance news from a German perspective | DW | 24.04.2012

Greek economy is likely to contract beyond forecasts

Greece's economy will perform even worse than forecast in March, the country's central bank chief has warned in an address to shareholders. He urged policymakers to adhere to agreed budget consolidation targets. 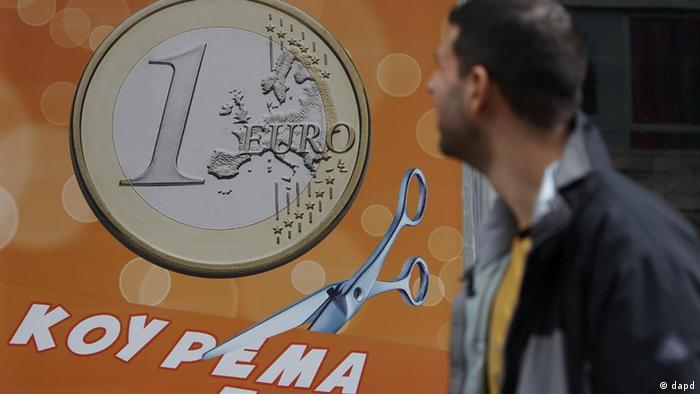 The Greek economy will contract by 5 percent in 2012, the country's Central Bank Chief, George Provopoulos told an annual shareholders' meeting in Athens on Tuesday. His projection topped a March forecast by the bank, which expected a 4.5-percent contraction in the 215-billion-euro ($283-billion) national economy.

Greecehas already been bailed out twice by Europe and is currently in its fifth consecutive year of recession. The government is under enormous pressure to apply more fiscal austerity in order to consolidate its finances along the lines agreed with eurozone partners and the International Monetary Fund (IMF).

Provopoulos, who's also a members of the governing council of the European Central Bank, warned that Greece's continued EU membership was at stake if the country failed to deliver on its promises, and that it risked a chaotic default.

"If following the May 6 national election doubts emerge about the new government and society's will to implement the austerity program, the current prospects [of recovery] will reverse," Provopoulos said on Tuesday.

He issued that warning against the background of opinion polls suggesting that the country's two main parties will barely secure a majority in parliament.

Provopoulos announced that the fiscal shortfall in the country had fallen considerably in recent months, but it remained high nonetheless. In 2011, the Greek budget deficit fell by 1.2 percent year-on-year so that it had to borrow an additional 9.1 percent of gross domestic product. It aims for 6.7 percent this year.

Whoever emerges as winner in the May 6 election will have to agree to additional spending cuts to the tune of 11 billion euros for the 2013-14 period, or risk losing financial support.