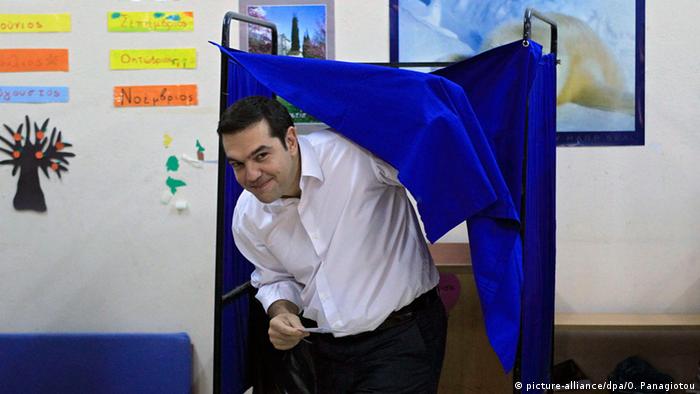 "The electoral result appears to be concluding with Syriza and Mr. Tspiras in the lead," Meimarakis told journalists on Sunday.

"I congratulate him and urge him to create the government which is needed and come to parliament," he added.

Following the Sunday elections in Greece, the polls for several TV stations showed Syriza picking up between 30 and 34 percent of the vote compared to between 28 to 32.5 percent for New Democracy, led by Vangelis Meimarakis.

At the same time, the left-wing Syriza seems unlikely to reach 38 percent of the vote that would allow them a parliamentary majority. Under Greek law, an additional 50 seats are automatically added to the winning party's total in the 300-member parliament.

The neo-Nazi Golden Dawn party expected to have between 6.5 and 8.0 percent of the vote, competing for the third place with the socialists from Pasok, who are at 5.5 to 7.0 percent.

Former Prime Minister Alexis Tsipras is looking for a fresh mandate to push through the reforms agreed under the terms of the new 86-billion-euro ($97-billion) international rescue deal in July.

Casting his vote in the working-class suburb of Athens, Tsipras urged the voters to "give a mandate for a strong government with a four-year horizon, which is what the country needs."

The Sunday elections were the third national vote this year, after an election in January and a referendum on the terms of the bailout deal in July.

Tsipras faced heavy opposition both within and without his leftist Syriza party after deciding to accept the terms of the bailout deal, effectively going back on his campaign promises.

Tsipras' estranged ex-finance minister Yanis Varoufakis dismissed Sunday's election as an attempt to "to nullify" the will of Greek people.

DW's Milan Gagnon, who was in Athens as voting began, said the mood was somber.

"What we are hoping for is for the less useless (politician) so he does the least damage to Greece," said 77-year-old Yiannis outside a polling station in Athens.

"I voted, but with a heavy heart," said 29-year old Athens-based researcher Despina Biri. "The bailout is here and now we are only looking for a manager to implement it."


At the same time, many voters still support the left-wing Tsipras and side against the two major Greek parties that alternated in power for decades."

"We want to be done with thieves, first the Germans and then the conservatives and socialists," 63-year-old Efthymia Xanthou said.

In the last polls published on Friday, Tsipras and his Syriza party were showing between 0.7 and 3.0 percentage points ahead of the conservative New Democracy party headed by Vangelis Meimarakis.

At the voting booth in the Greek capital, Meimarakis said Sunday was a day of celebration for voters to banish "greyness, falsehoods and misery... (on which they could) bring in authentic people for a better tomorrow for all Greeks."

Either party would be obliged to develop a coalition in order to form a new government. There are nine parties hoping to enter parliament and the minimum requirement for parliamentary representation is 3 percent of the vote.

Whichever party wins, the main task of the government would be to enforce the measures being demanded of Athens by foreign lenders. More than 100 reforms, many with consequences for the way the public administration is run, have to be legislated in the coming weeks.

Tsipras has defended his decision to accept the terms imposed for the bailout by creditors, saying that had he refused to agree to the three-year bailout, Greece would likely have been ejected from the eurozone.