Greek bankers embroiled in corruption scandal | Europe | News and current affairs from around the continent | DW | 26.01.2014

The former chairman of the Hellenic Postbank stands accused of issuing dubious loans to befriended business partners under preferential terms. The bad deals are said to have cost the Greek people some 400 million euros. 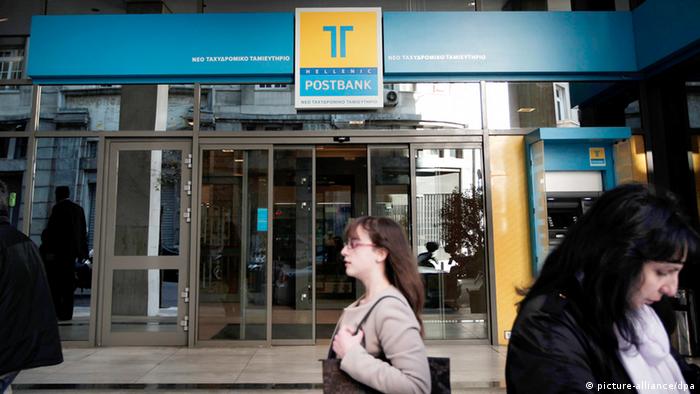 The full extent of the affair is still unclear. But what is known so far is that state prosecutors are examining allegations that the former chairman of Hellenic Postbank, Angelos Filippidis, approved numerous loans to companies that had previously failed credit checks. As a result, Greek taxpayers are said to have been burdened with losses totaling some 400 million euros. Filippidis also stands accused of having accepted bribes for issuing his approvals.

Thirty-nine people are currently being investigated in connection with the Postbank affair. The bank was once a quasi-government financial institution owned and operated by the Greek postal service. Two former deputy directors have been arrested in Athens. Filippidis was detained in Istanbul, leading to rumors that he had squirreled away the money he allegedly received in bribes in Turkish banks. Athens prosecutors are also looking into allegations of secret accounts in Switzerland and Montenegro.

"In Filippidis' case, the issuance of loans began in 2008 and contradicted standard business practices at the Postbank, which until then, at least, had operated on a rather smaller scale," according to business analyst, Panagiotis Bousbourellis.

Of course, it's not illegal to change policy, but the Greek national bank had warned the Postbank against making unnecessarily risky investments. Those warnings went unheeded, Bousbourellis said. 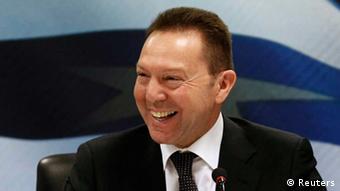 Finance Minister Stournaras - when he still had something to smile about

The Greek national stability mechanism was forced to shell out five billion euros to protect the financial institution from bankruptcy And it doesn't make matters any easier for prosecutors that the head of that fund, Anastassia Sakellariou, was on the board of the Postbank two years ago.

Nevertheless, Greek Finance Minister Yannis Stournaras has voiced his support for Sakellariou, saying he had "complete faith" in the justice system and in his colleague.

The proximity between politics and the economy is nothing new in Greece, said journalist and former government spokesman, Dimitris Tziodras. There have been cases in the past in which company representatives received government money under preferential terms, or that bribes were offered in exchange for state-funded contracts.

"We must not forget that the Postbank used to be a state-owned institution; the board was named by the government," said an emphatic Tziodras.

The journalist Bousbourellis, meanwhile, notes the close relationship between party politicians and public administrators, pointing out that former Postbank chairman Filippidis was personally selected by then Prime Minister Kostas Karamanlis. Only after the change in power in 2009 was Filippidis replaced - by Kleon Papadopoulos, a personal friend of the newly elected Prime Minister Giorgos Papandreou. 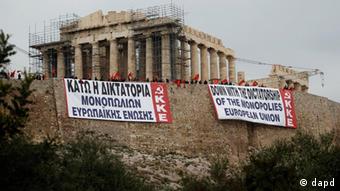 The Postbank scandal is another blow to the political establishment

The Left-wing opposition in Athens, which according to recent polls is more popular than the governing Conservatives, is looking to use the Postbank scandal to its advantage.

Opposition leader Alexis Tzipras has described the affair as a "triangle of corruption" made up of leading companies, banks and political parties that exchange favors.

"The opposition is not only singling out the Postbank scandal. They've also turned their attention to the Agricultural Bank of Greece (ATEbank), which they accuse of granting free loans to both the Conservatives and the Socialists. 'Free' because the bank accepted future party revenues as collateral, although it was not clear there would be anything to pay out," explained political journalist Tziodras. What's more, the board of the once government-owned ATEbank, like the Hellenic Postbank, was chosen by the party in power at the time.

The head of Greece's central bank, Giorgos Provopoulos, has received a threatening letter from a hitherto unknown group of extremists. Police said the letter contained bullets. A journalist was also targeted. (17.01.2014)

In Greece even the middle class is suffering because of the crisis. Soup kitchens and food donations for the needy are being organized - even in fancy suburbs of Athens. (13.01.2014)

Global financial leaders have expressed cautious optimism at the World Economic Forum in Davos. But the IMF has warned that deflation and the tapering of Federal Reserve stimulus posed new risks to the global economy. (25.01.2014)