Greek and Turkish premiers meet amid border fence controversy | Europe| News and current affairs from around the continent | DW | 07.01.2011

The Greek premier met his Turkish counterpart on Friday, amid a debate over controversial Greek plans to build a fence along the border between the two nations. Both sides pledged to cooperate closely with one another. 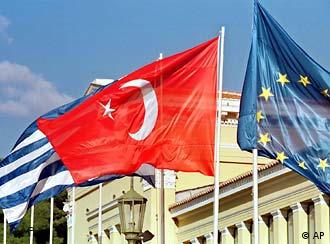 Greece and Turkey have improved relations

Greek Prime Minister George Papandreou met his Turkish counterpart Recep Tayyip Erdogan in eastern Turkey on Friday, in a visit aimed at improving relations amidst a debate over border issues between the two countries.

Erdogan also delivered a message of support for improved relations between the two nations.

"We are making intense efforts to turn the Aegean into a sea of peace and friendship," Erdogan said. "We must build a world in which peace prevails by leaving behind the mistakes of the past."

The Greek leader emphasized recent efforts to work more closely with Turkey, and said Greece would support Turkey's bid to host the 2020 Olympics.

However, neither side made direct reference to Greek's announcement a week ago that it plans to build a 206-kilometer (128-mile) fence along the Greek-Turkish border in order to curb illegal immigration. The plans were amended a few days later to only cover 12.5 kilometers of the border.

Turkish media reported that the issue was discussed in private by the two leaders. According to media reports, the two countries are planning to hold "technical meetings" to address the flow of illegal immigrants. 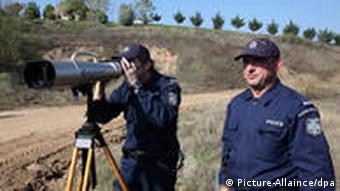 Greek Foreign Ministry spokesman Gregory Delavekouras said the border issue was on the table in discussions with Erdogan.

"We are pushing for more cooperation from Turkey and for more European involvement because Greece right now is the buffer where illegal migrants enter the EU," he said.

Greece estimates that thousands of migrants illegally enter the European Union through its border with Turkey every month. After pleas for help from Athens, the EU border agency Frontex dispatched temporary intervention teams last year to help secure the border.

Amnesty International condemned the border fence plans as a violation of human rights, while the European Commission called it a temporary solution to a deeper problem.

While Greek-Turkish relations have improved significantly over the past decade, disputes remain between the two NATO allies.

Territorial rights in the Aegean Sea have long been a stumbling block, with the two countries nearly going to war over a tiny deserted island in 1996. Repeated Turkish military flights in the Aegean region also provoke anger in Greece, which says they undermine diplomatic efforts.

Greece has opened up to the idea of Turkey joining the EU, but member state Cyprus has stalled accession talks over Turkey's support for the breakaway Turkish north of the island.

Greece tones down plans for a border fence after harsh criticism

Greece scaled back its plans for a border fence with Turkey to stem illegal immigration, following critical remarks from the EU and human rights organizations over the weekend. (03.01.2011)