Gorbachev, Bush and Kohl revisit Berlin, remember the fall of the Wall | Germany| News and in-depth reporting from Berlin and beyond | DW | 31.10.2009

The former leaders of the USSR, West Germany and the US met in Berlin Saturday to remember the events that lead to opening the Berlin Wall on November 9, 1989. 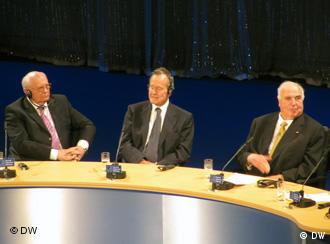 "Great men - patriots with respect for other nations"

Mikhail Gorbachev, George H. W. Bush and Helmut Kohl gathered on Saturday in the German capital to remember the fall of the Berlin Wall 20 years ago.

Bernhard Vogel, president of the Konrad Adenauer foundation which sponsored the event, praised the former US president.

"You came to our side. You supported us Germans without hesitation," he said to a grinning Bush.

From the fall of the Wall to reunificiation

Vogel also had warm words for the former Soviet premier, saying that previous Soviet leaders would have sent in the tanks to prevent the collapse of the communist system in Germany, but Gorbachev did not. Within weeks of the Wall's opening in Berlin, the German communist system was finished. 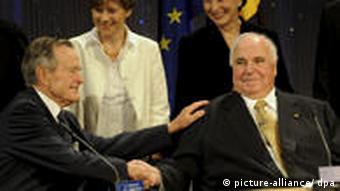 Helmut Kohl went on to lead a reunified Germany until 1998

Honored, too, was former Chancellor Helmut Kohl, for his role in seizing the opportunity to reunite Germany as one nation.

"These three men are great men," German President Horst Koehler said at the event, "Nations need patriots who also have respect for other nations."

But Gorbachev, in recognizing the two other European leaders who were absent, remembered that a reunified Germany had not always been seen as a desirable outcome. Former British prime minister Margaret Thatcher, now 84 and suffering from Alzheimer's disease, and the late French president Francois Mitterand, had been less than enthusiastic about the prospect.

"Thatcher and Mitterand and myself, we defended the position that there needed to be two Germanys," Gorbachev said. "I'm sorry, Helmut. We didn't have good relations at the start."

Calls for "intensive relations" between EU and Russia

Koehler called for European security policies to work more closely with Russia, saying that tighter bonds with Russia would complement Europe's strong relationship with the US to the West.

He said the time was right for an "intensive dialogue" between the European Union and Russia.

Other former leaders who attended the event included Tadeusz Mazowiecki, former leader of Poland and Miklos Nemeth, then the prime minister of Hungary.