The awards have been handed out at the Venice Biennale contemporary art fair. The Republic of Armenia and American artist Adrian Piper picked up the top honors. 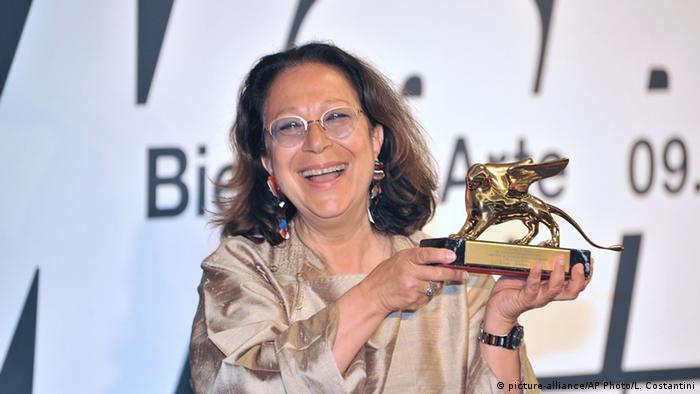 At an awards ceremony held to coincide with the Venice Biennale's opening, the judges praised Armenia's entry in the national participation category, declaring it the winner out of a total 89 entries.

"In a year that witnesses a significant milestone for the Armenian people, this pavilion marks the resilience of trans-cultural confluence and exchanges," the international jury said, referring to the exhibit which was based around the Armenian diaspora. It comes days after Armenians marked 100 years since mass killings by Ottoman Turkish forces, which modern Turkey has refused to recognize as genocide.

The Golden Lion for best artist in the international exhibition went to American-born Adrian Piper. The Berlin-based conceptual artist created an installation of hospitality desks inviting participants to commit to one of three rules, including "I will always be too expensive to buy."

"Her presentations invite us to engage in a life-long performance of personal responsibility," the jury said.

A Silver Lion to acknowledge a promising young artist went to South Korean Im Heung-Soon for a video work about working conditions for women across Asia.

The board of the Biennale awarded a Golden Lion for lifetime achievement to El Anatsui from Ghana, as well as a special Golden Lion for service to the arts to Suzanne Ghez of the USA.

The 56th edition of the contemporary art showcase is under the curatorship of Okwui Enwezor. Its official theme is "All the world's futures."

The Venice Art Biennale is due to run until late November, encompassing the Venice International Film Festival in September.