Millions raised for the "Freedom Convoy" protest against COVID measures will be refunded or redirected to charities, the crowdfunding platform said, after police reports of "unlawful activity." 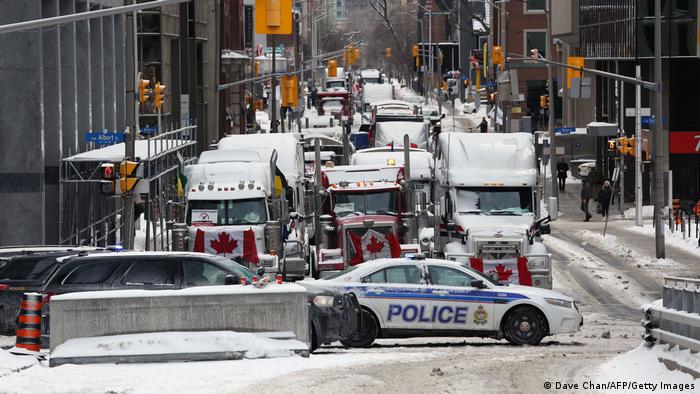 ​​​​The Freedom Convoy started on Canada's Pacific coast in late January and picked up supporters along its 4,400-kilometer (2,700 miles) trek to the capital

More than a week after a trucker convoy shut down Canada's capital, Ottawa, against the country's COVID-19 measures, police on Friday warned the protest is becoming "increasingly dangerous."

Ottawa police chief Peter Sloly said they expected the demonstration to ramp up again this weekend, with hundreds more truckers planning to enter this city as part of the so-called Freedom Convoy.

Protests are also planned in Toronto, Quebec City and Victoria in British Columbia.

Sloly said police would adopt a "surge and contain" strategy, including reinforcements of 150 officers deployed downtown, to restore order.

Cash raised for convoy to be refunded

GoFundMe said it cut off a fundraising campaign for the organizers because it had determined the effort violated the site's terms of service due to unlawful activity.

"We now have evidence from law enforcement that the previously peaceful demonstration has become an occupation, with police reports of violence and other unlawful activity,' the crowdfunding platform said in a statement.

"No further funds will be directly distributed," GoFundMe said, adding that it would refund or redirect to charities the vast majority of millions raised by demonstrators.

The protest organizers are also facing a class-action lawsuit over the continuous horn noise, filed on behalf of residents.

Sloly acknowledged "trust has been impacted" as Ottawa residents are furious with the sounds, traffic gridlock and harassment they have faced.

Many people were outraged after some protesters urinated and parked on the National War Memorial. One danced on the Tomb of the Unknown Soldier. A number carried signs and flags with swastikas.

The province of Ontario's Conservative premier Doug Ford on Friday joined the growing chorus for the convoy to leave:

"It's not a protest anymore. It's become an occupation,'' Ford said. "It's time for this to come to an end."

Thousands of protesters railing against vaccine mandates and other COVID-19 restrictions descended on the capital last weekend, with trucks and other vehicles deliberately blocking traffic around Parliament Hill. 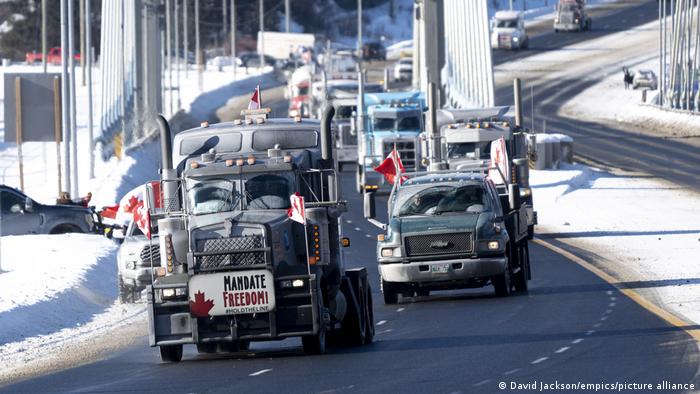 ​​The so-called Freedom Convoy started on Canada's Pacific coast in late January and picked up supporters along its 4,400-kilometer (2,700 miles) trek to the capital

The truckers have said they won't leave until all mandates and COVID-19 restrictions are gone. They are also calling for the removal of the government of Prime Minister Justin Trudeau, who has refused to meet with them.

The convoy has attracted support from former US President Donald Trump, who said the truckers were "peacefully protesting the harsh policies of far-left lunatic Justin Trudeau who has destroyed Canada with insane COVID mandates."

The protest is dividing the official opposition Conservative Party, which this week ousted its leader amid complaints he had not sufficiently backed the truckers.

Interim Conservative chief Candice Bergen has voiced support and on Friday issued a statement asking Trudeau to provide a clear plan to end the blockade and urge the truck drivers to remain peaceful.

The party's public safety spokesman, Pierre Paul-Hus, tweeted on Friday that the blockade needed to end.

"Those who govern must listen to those governed. Liberals know most Canadians — not only protesters — want restrictions to end, but they won't listen. Instead they vilify those who disagree as 'the other' to sow division for political gain," he wrote on Twitter. "It's time Liberals show respect & listen."

Correction: An earlier version of this article described Ontario as a "state." This has been amended to province.