The re-appearance of a secret atlas seized by US troops from Luftwaffe chief Hermann Goering in the waning days of the war shows just what the Nazis were capable of. 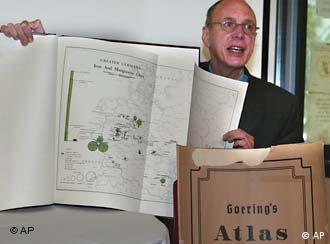 Historians believe the atlas aided US policy in postwar Germany

After Goering fled Hitler's bunker, leaving the diabolical Nazi leader to end his life, he sought refuge in the mountains near Berchtesgarden, from which he planned to announce himself the new Nazi strong man.

It was there US troops from the 101st Airborne Division found him and seized his documents including an atlas of 33 large maps of Nazi-occupied Europe. The maps showed not only the raw material resources over which Germany had control, but the country's industrial capacity as well.

Historians believe the atlas, which re-appeared after almost 60 years in Hamburg and was re-published last week, informed American policy towards postwar Western Germany. Its detailed descriptions of the Nazi war machine and its resources are unique and offer historians the first accurate estimation of what the Nazis were capable of.

After its seizure, the atlas made its way to Washington where it was pored over and then forgotten. Last year, a copy of the atlas left in an inheritance in Hamburg was handed to German book publishers who immediately set about getting it into print. The large-format Atlas sells for €178 ($227).

Abelshauser said he is sure Washington officials used the information held in "Görings Atlas" to re-direct their reconstruction policy. The Americans used the astounding amount of resources and industrial capacity in Western Germany to help the country rebuild, rather than implementing a policy of punishment, as the Soviets did in the East, said Abelshauser.

Contrary to what the allied powers thought, American and British bombers did not wipe out Germany's industrial production facilities. Armed with the information, reconstruction officials were able to use those facilities to spur on the country's postwar economic miracle.

"The maps were surely a big part of the reason that America's European strategy changed dramatically in 1946," said Abelshauser.

The discovery of the atlas last year led to the additional discovery that a copy of the book sat forgotten in the Library of Congress for decades. The copy proves that the Hamburg atlas is not a forgery, but an historical record that for the first time gives an accurate idea of how powerful the Nazi economy really was.

"Der Untergang," the film that portrays the human side of Adolf Hitler opens across Germany this week. The film's director Oliver Hirschbiegel talked to DW-WORLD about his reasons behind the portrayal. (Sept. 17, 2004)

Each year, about 200,000 tourists visit "Wolf's Lair," the wartime hideout of Adolf Hitler. But only a few ruins remain of the place where army officers attempted to assassinate the German dictator 60 years ago. (July 20, 2004)