Each year, about 200,000 tourists visit "Wolf's Lair," the wartime hideout of Adolf Hitler. But only a few ruins remain of the place where army officers attempted to assassinate the German dictator 60 years ago. 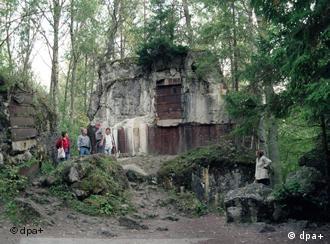 One wall is all that's left of the dictator's bunker

Moss-covered and grown over by trees, massive concrete blocks lie in the forest near the town of Kentrzyn in northern Poland. About every third visitor who comes here is German, according to Jerzy Szynkowski, who guides people through the site. Many are older, but only a few are die-hard Nazis, he said.

On this day, he's guiding a group from Berlin and Cologne through the well-kept area. Most are impressed by the size of the buildings that were all blown up by the Germans before the end of the war. Many are sensing the oppressive atmosphere of this place, where Hitler lived for almost three years.

"These buildings are a shocking madness," one visitor told German public broadcaster WDR. "It's a sign that something like this must never happen again." 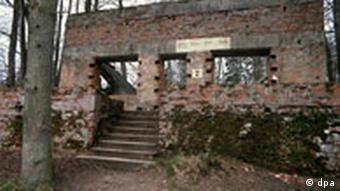 The ruins of Wolf's Lair's movie theater, where Hitler watched the trial and execution of the men who tried to assassinate him on July 20, 1944

"This regime spent all this money to destroy everything and dirty a Germany that was once known for its scientific, literary and cultural achievements," he said.

During summer, up to 3,000 people come to Wolf's Lair in a single day. The tour starts at the former barracks, passes never-used buildings for Hitler's deputy, Martin Bormann, and ends at the completely destroyed Hitler bunker.

Only one of the bunker's walls remains today: Nazi officials had ordered the building to be destroyed in Nov. 1944.

On Tuesday, the 60th anniversary of the assassination attempt on Hitler, a new memorial will be unveiled to honor the German resistance. Another memorial already exists exactly on the spot where Claus Schenk von Stauffenberg detonated a bomb that was meant to kill the dictator.

But outside Wolf's Lair, souvenir merchants are trying to make a living by selling macabre items related to the place: Among other things, they offer ashtrays in the shape of a skull and a chess game with SS officers and German soldiers and Hitler as king.

As the Nazi regime began losing the war in 1943, Hitler set about building a massive, top-secret building complex in Poland. Sixty years on, "Project Giant" is beginning to turn into a tourist attraction. (Aug. 10, 2003)

Thousands of German youths descended on the Baltic island of Rügen this weekend for the Prora03 festival. Despite the location's controversial past, organizers hope the event will raise the spirits of the depressed region. (Aug. 25, 2003)