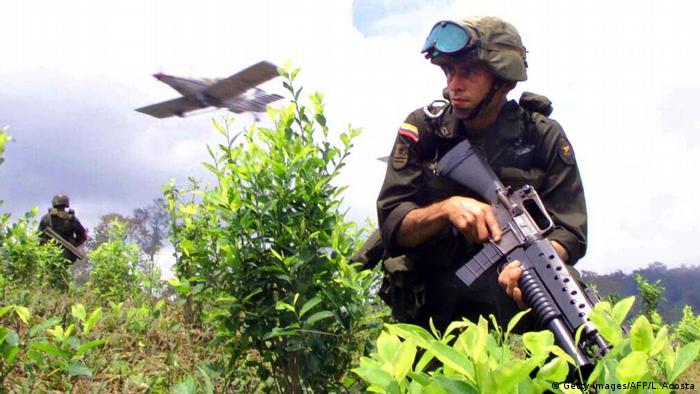 Pedro Arenas is afraid that they'll take flight again. "I expect it could be within the next months," he says. Since the end of last year, nine AT-802 firefighting aircraft have been deployed throughout the country. But their mission is not to put out fires.

The planes are trying to eliminate a problem that has been causing bloodshed in Colombia for decades: cocaine. The planes are loaded with the controversial herbicide glyphosate. According to Colombian media, nearly 800 barrels of the chemicals are in stock from a Chinese manufacturer.

Arenas fights for the rights of people in remote areas of Colombia, and he also has political experience under his belt. Arenas was previously a member of parliament in Bogota and mayor of his hometown, San Jose de Guaviare, which is located at the foothills of the eastern Andes in Colombia. Beyond the piedmont is where no-man's-land soon begins: no cities, hardly any roads, and hectares of coca. The last thing Arenas wants for the region is the return of the airplanes. 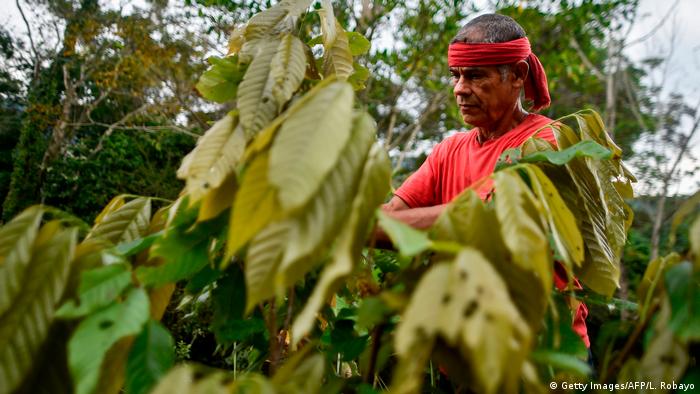 For many farmers, coca cultivation is necessary to survive

For Arenas, the herbicide is a symbol of a brutal anti-drug battle.

When the first glyphosate offensive began in 1994, he was 23 years old. Plantains, yuca, corn — many important crops were destroyed at that time. "Some of my closest friends had to leave their property because they no longer had a livelihood there," Arenas told DW in a phone interview. There was also a striking number of illnesses. But no one had seriously documented the cases.

In Europe, the use of glyphosate has triggered a debate about the future of agriculture. In the US, nearly 50,000 lawsuits are currently pending against Monsanto, a subsidiary of German chemical giant Bayer that manufactures the product under the trade name Roundup.

The year 2015 marked a turning point in Colombia. The World Health Organization's (WHO) International Agency for Research on Cancer classified glyphosate as "probably carcinogenic." Colombia's response was to stop the aerial fumigation.

In the peace agreement between FARC guerrillas and the government a year later, a new approach to coca cultivation was agreed upon: less confrontation, more cooperation. The farmers were to pull out the coca plants themselves, and those who had access to local markets could participate in coca substitution programs.

But this cooperative approach has not worked out so far. "Colombia is still at the highest levels of coca cultivation since the count began in 2011," said Pierre Lapaque, the UN Office on Drugs and Crime representative for Colombia, when presenting the cultivation figures last year. While the areas planted with coca have decreased slightly, cocaine production has nevertheless increased.

This is also evident in Europe. Authorities say never before has so much — and such pure — cocaine been seized. The battle for every gram is fought far from the glittering cities of New York, Berlin or Paris; the real fight is in the remote areas of Colombia, where organized crime creates the state of play.

But conservative President Ivan Duque has since taken office, meaning an opponent of the rebel peace deal is the one who determines the way forward. The effort to sidestep the agreement may be one of the reasons why the state has so far failed to make an impact in very remote areas. It is here, especially, Arenas says, that coca is being cultivated much more than before.

Elizabeth Dickinson of the organization Crisis Group, in response to a DW inquiry about whether Colombia's subsistence coca cultivation program is in crisis, said the responsible authority is underfunded and is paying compensation to farmers for the eradication of the plants with a long delay. "This puts families and communities in great economic peril and leaves them vulnerable to new pressure from the illicit economies they are trying to escape," said Dickinson, an expert on Colombia.

It was only a matter of time before Duque would send planes back into the air. "The government does seem determined to do so in a bid to reduce the coca numbers," Dickinson said — and the Colombian leader is getting a tailwind from the White House.

"Well, you're going to have to spray.  If you don't spray, you're not going to get rid of them.  So you have to spray, with regard to the drugs in Colombia," US President Donald Trump said this week when Colombia's president visited the White House.

"The US is one of the largest donors to the Colombian government, and the two countries' militaries work closely together. Bogota literally cannot afford to lose Washington's support." Dickinson said.

Arenas sees a political calculus behind the potential use of glyphosate: "Then our president has some good figures for Trump," he says, referring to coca cultivation levels. The aerial fumigation offensive in the mid-1990s also reduced the area under cultivation in the short term. A few years later, however, it was back at a record level.

The possibility of resumed herbicide application leaves those close to the matter concerned about its destructive social potential.

If spraying resumes, "people in the remote communities will completely lose faith in the institutions and the peace process," Arenas believes.

He still has powerful allies. The Colombian constitutional court, in particular, has imposed strict regulations on the president for the use of glyphosate. This means that the communities must also agree on aerial fumigation. Arenas fears that Duque could override this.

"If the planes take off, we'll appeal to the highest authorities," he says.

Lacking resources and organization, authorities in Uruguay are struggling to combat global drug trafficking. The country has become an increasingly important hub for drug smugglers as a result. (06.08.2019)

A record 4.4 tons of cocaine packed in containers of soy flour and destined for Togo has been seized in Montevideo. Uruguay has increasingly become a hub for South American narcotic shipments to Africa and Europe. (27.12.2019)