Mutatoes: The models of the vegetable crate

Fruits and vegetables are sorted before they are sold. What does not reach a certain standard, will be discarded. Uli Westphal takes photos of the rejected goods, so that we can remember how they actually look.

The appearance of the fruit and vegetables adorning our supermarket shelves is a deceptive one. It often draws a completely false picture of the actual diversity of the produce. Apples, tomatoes and plums are uniformly round and shiny, cucumbers appear straight and long, lemons look like they were painted and eggplants have the perfect shape and size. But what actually grows on farmers' fields looks very different.

The varity of colors, shapes and tastes is much bigger. They just don't end up in the supermarkets because it's harder to store and transport them, or they are just not attractive enough for the common customer. The diversity of agricultural crops has to be documented and a demand for natural forms in society has to be re-established, says the artist Uli Westphal.

For his Mutato archive he searches for fruit and vegetables that have a natural, and an arguably unattractive look. His collection includes several thousand images.

Global Ideas: Why do fruits and vegetables at grocery stores always looks the same?

Uli Westphal: This is a huge, complex issue. Among other things, the growing and harvesting methods, logistics, trade policies, and aesthetic selection criteria of supermarkets and consumers play a role. There is a lot of produce that is discarded or already left in the field, because it does not meet standards. Almost 50 percent of the early potato harvest is destroyed every year for example. That's similar for other foods, even if they are perfectly fine. And this sorting process starts already with the seeds.

What's wrong with the seeds?

A large proportion of the seeds used today are so-called hybrid seeds. They grow very uniformly, as they are always derived from the same breeding lines. Many of these hybrid seeds are produced in Asia and exported to the whole world.
Originally, the seeds were produced on the farms, as part of the annual harvest. Over centuries the plants developed thousands of varieties that had perfectly adapted to the particular soil and climatic conditions of different regions. This process barely exists today, and many of the traditional varieties are gone because they simply do not meet the usual standards of today. Whether it's size, storage capacity or yield. 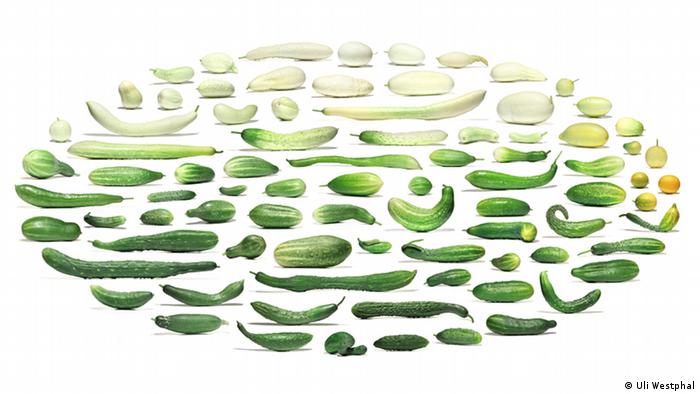 You are photographing curious specimens of fruit and vegetables, which do not meet the standards we know from the supermarket. How did that happen?

I was fascinated by the different forms. When I studied in Holland everything was standardized on the vegetable and fruit markets. Than I came to Berlin, and I went to the vegetable market on Maybachufer in Kreuzberg, where sub-standard goods are often sold. And many stalls offered vegetables that were not standardized, like an eggplant, where five of the vegetables had grown together into one, or crooked cucumbers, or Siamese tomatoes. I wanted to understand why we don't see such things in the supermarkets and I started researching.

But you don't have an agricultural background?

No, I have gathered knowledge over the years. I read a lot and investigated agriculture and food. There's no direct connection. But I grew up in a rural area and I always had animals around me. The interest in nature and the environment was always there.

And the photography? You literally stage your Mutatoes.

The type of photography I use, is based on the modeling in catalog photography. The item is shown isolated on a white background. I wanted the excluded product to be actually in the spotlight and make it equal with others. Photography was simply the fastest and most effective way to create such a collection and make it visible. It would have been possible to safely preserve the fruits and vegetables in jars, but that would have been out of control quickly.

Did you have the idea of ​​a collection from the beginning?

I started very quickly to see the whole thing as a series. On my first visit to the Berlin market I bought and photographed ten products. Since then I was already clear in idea that there will be a collection.

A collection that grows for almost ten years already...

The Mutatoes are an endless project. Whenever I go shopping and see something that interests me, I'll buy it and photograph it. From this work, another project originated, the Cultivar Series.
Unlike the Mutatoes, the Cultivar Series is dedicated to the thousands of crop varieties that are no longer grown because they also no longer meet the market standards. Over the last 50 years, the majority of varieties that had been developed by humans over the course of history have disappeared. Those varieties are still important for our future and must not be forgotten. I collect them, I plant them and I photograph them.

Where do you get the seeds from?

There are initiatives around that operate conservation gardens and grow old varieties. And there are gene banks for crops, where seeds are stored in giant underground fridges. These gene banks must grow a certain percentage of their collection each year in order to gain new seeds. So the varieties stay alive.

I have a garden in Berlin, where I grow plants every year. I photograph the fruits and afterwards eat them to date, I have planted some 300 different varieties. Besides those I grow myself, I find old varieties while traveling and in markets or I receive them from farmers and seed banks. My collection now consists of several thousand pictures of more than a thousand different varieties.

Today, more and more people are interested in urban farming, they grow fruits and vegetables and generally seem to have a greater interest in their diet. What do you think about that?

The consciousness about food is actually greater today. People want to know where their food comes from and how something is produced. In recent years, this has even led to an increasing number of campaigns by supermarkets, where products have been sold that did not meet the usual standards. Unfortunately, these campaigns are often only temporary, and frequently serve more as an opportunity for greenwashing. But without the new consciousness of the people, the campaign would never have been started.

Hybrids are very profitable under certain conditions - if they are given the appropriate climate, fertilizers, pesticides and proper irrigation. If these external resources are gone - and that's what will happen in the future - the yield of these plants will drop. And hybrid plants can't produce seeds of equivalent quality. Farmers have to buy these seeds every year, they are dependent on seed corporations. All this is very expensive and works only for a certain period, and only in the first world and only when practiced on a large scale.

Most of the world's population is still fed by small farms. For these farmers, it makes much more sense to use traditional seed varieties. These seeds have adapted to the local conditions and thereby provide a more reliable yield. The farmers produce and improve their own seeds. In the end, it's much more efficient than a seed company that works on just a few varieties over the years.

Organic agriculture is often more complex and labor intensive, but can be even more productive than industrial monocultures, without destroying the soil, without poisoning the water and without depending on external resources. We need independent, local seed production to make our agriculture sustainable.

So how do we get Mutatos and old varieties back on the agenda?

The easiest thing to do is to go to local markets and buy directly from farmers. This supports and has a direct impact on local agriculture and on the cultivated plants. It is slightly more expensive than in discount stores, but the quality you get is much better.

Thank you for the interview.

Uli Westphal not only takes photographs of strange fruit and vegetables, he's also happy to eat any of his subjects. With many thousands of pictures come a lot of recipes. One of his favorite recipes is banana bread. Whoever tries it, he says, will never again throw an overripe banana away:

Mash the banana in a bowl, melt the butter and mix both. Then add the baking powder, salt, sugar, vanilla sugar, the egg and finally the flour, mix everything. Now, pour the batter into a greased bread form (or alternatively into muffin forms).

Bake for about one hour (shorter if in muffin forms). After 50 minutes use a toothpick to test whether the dough is done. If it comes out clean without any dough, the banana bread is ready.

So beautiful, so strange