Protesters demanding action from world leaders on climate change have massed in 158 countries, culminating in a large march in New York. It’s the venue of a special UN climate summit due on Tuesday. 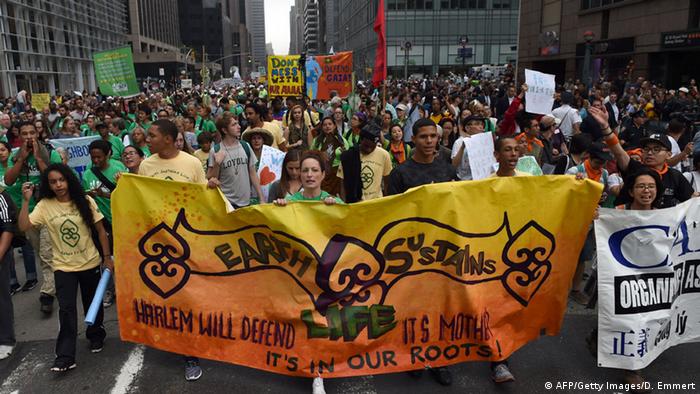 Massed calls were made on Sunday for urgent climate change remedies at rallies from Melbourne to New York. Organizers described the events worldwide as the "largest climate demonstration of all time."

Celebrities such as actor Leonardo DiCaprio, former US vice president Al Gore and French Ecology Minister Segolene Royal were among a New York crowd put by organizers at 310,000 that marched down Sixth Avenue.

Among them, UN chief Ban Ki-moon said he was overwhelmed by the "energy and voice of the people" and hoped their message would impact on world leaders and representatives who are due to attend Tuesday's summit.

The one-day UN gathering is supposed to set the stage for a crucial UN negotiations conference in Paris in December 2015 aimed at finalizing a new global climate pact on limiting fossil fuel emissions.

In 2009, a major UN climate conference in Copenhagen ended without a climate deal amid widespread disappointment.

Sunday's worldwide protest followed a US federal weather agency finding that August was the warmest month on record.

Average world temperatures stood at 16.35 degrees Celsius, according to the National Ocean and Atmosphere Administration.

'Fighting for our children'

More than 10,000 protesters, including families with young children, converged on Berlin's Brandenburg Gate, many riding bicycles and demanding adoption of sustainable forms of energy usage.

At a main rally in Melbourne attended by 30,000, demonstrators criticized Prime Minister Tony Abbott whose government repealed a carbon tax earlier this year. Australia is a major coal exporter.

In London, an estimated 40,000 people paraded past Trafalgar Square and the Houses of Parliament.

Actress Emma Thompson said the climate issue was "important for every single person on the planet."

"This is the battle of our lives. We're fighting for our children," Thompson said, adding that it should turn into the "greatest grassroots movement of all time."

In Paris, the venue of next year's key UN conference, some 5,000 protesters were told by French presidential envoy Nicolas Hulot (pictured center) that "climate change is already under way," despite denials by skeptics. 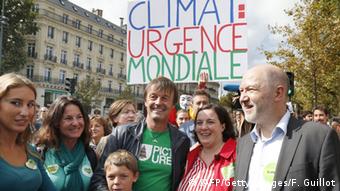 Paris, the venue of next year's UN conference

Ahead of Tuesday's New York summit, activists have criticized leaders of big emitters of carbon dioxide from fossil fuel combustion -- including China, India, Canada and Australia -- for only intending to send representatives.

US President Barack Obama is due to attend. His climate adviser John Podesta said the White House planned to roll out ambitious goals early next year.

Jennifer Morgan of the World Resources Institute said any new global agreement still faced a "very challenging road" inside and outside the US political system.

Morgan said stakeholders "want to know" whether the US and other major polluters such as China intended to implement their commitments.

The World Meteorological Organization (WMO) recently warned that atmospheric concentrations of carbon dioxide, the main greenhouse gas, had increased more in 2012 and 2013 than in any year since 1984.

In May, two US studies warned that the West Antarctic ice sheet was melting faster than expected and was starting to collapse.

Last year, the UN Intergovernmental Panel on Climate Change (IPCC) estimated that by 2100, sea levels will rise 26-82 centimeters (10-32 inches), driven partly by ice melt and partly by expansion of the ocean as it warms.