Glencore′s closure of Congolese cobalt mine ′could backfire′ | Business | Economy and finance news from a German perspective | DW | 20.08.2019

Glencore's closure of Congolese cobalt mine 'could backfire'

The plummeting price of cobalt has been blamed for the closure of the giant Mutanda mine, but other factors are at play. Owner Glencore is struggling to get the DRC's new president to overturn a 50% super-profits tax. 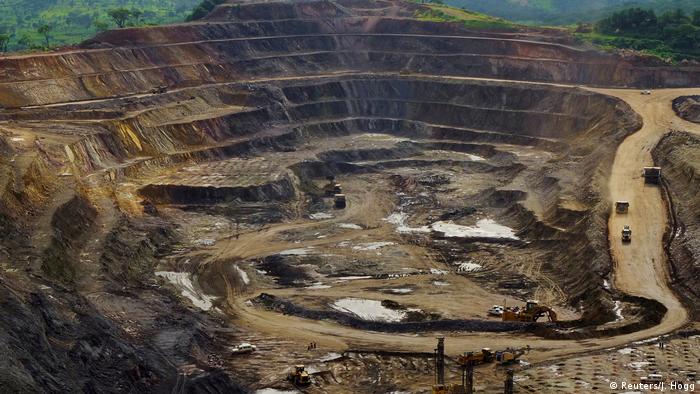 Cobalt — a byproduct of copper and nickel in mining activities — is an essential component in electric car and mobile phone batteries. The metal was supposed to help Glencore, the world's largest miner, to ride the electro-mobility and smartphone boom.

But a sudden 40% collapse in the price of cobalt prompted the British-Swiss multinational to announce earlier this month the temporary closure of its massive Mutanda mine in the Democratic Republic of Congo.

Mutanda, which alone produced a fifth of global cobalt supplies last year is expected to be placed in "care and maintenance" mode at the end of the year. But it could eventually restart production when the price of cobalt recovers.

Even so, the fate of its 7,000-strong workforce hangs in the balance.

On the face of it, Mutanda looks to be a victim of today's harsh economic realities. But the closure is actually linked to an ongoing standoff between the powerful multinational and the Congolese government.

Glencore had anticipated a reboot in relations after longtime leader Joseph Kabila was succeeded in January by Felix Tshisekedi. Kabila and the mining industry's once-cozy friendship was tested when he introduced a new mining code last June, months before leaving office and despite fierce lobbying.

"Glencore has had short shrift from Kabila, so when Tshisekedi came in as president, there was a lot of hope that things would change," said Indigo Ellis, Africa Analyst for the global risk consultancy Verisk Maplecroft, referring to Tshisekedi's campaign promise of pro-business reforms.

Glencore faces what it says are increasingly complex regulatory conditions in the DRC. For starters, the government last year nearly tripled royalties on mined cobalt to 10%. Ministers declared the metal a strategic resource and said it was only fair the country benefit more as nearly two-thirds of cobalt is mined there.

Even more punishing is a 50% super-profits tax, which kicks in when profits exceed 25% of those forecast in the mine's original feasibility study. Glencore complained that the prices were set several years ago when cobalt was worth much less than today.

"There is no doubt that this super-profits tax would make a mine unprofitable," Ellis told DW, adding that the DRC government last year also removed a mechanism that gave mining companies a decade to plan for any new regulatory regime.

Ellis said Glencore lost patience with the Congo's deadlocked politics after Tshisekedi took four months to announce a new prime ministeras he sparred with Kabila's Common Front for Congo (FCC) party, which continues to hold an absolute majority in parliament.

Read more: Is child labor the price for e-cars?

The price of cobalt surged between 2016 and 2018 after the auto industry declared the combustion engine era over and the age of electromobility upon us.

Although cobalt isn't a huge part of Glencore's business, the company is still the largest miner of the metal. It says it paid $626 million in taxes from Mutanda last year, more than a tenth of the DRC's total budget.

Despite its huge contribution to government coffers, the extraction halt at Mutanda could backfire, Ellis told DW.

After all, this is not Glencore's first Congolese mine closure. Last year, it halted extraction at the Kamoto mine after finding high levels of uranium in the ore, a move skeptics criticized as more political than safety-based. The decision prompted an export ban in a dispute over duties that cost Glencore hundreds of millions.

"The mining sector in the DRC is still run by the Kabila old guard. He still holds the keys to the war chest," Ellis said.

As Kabila thinks that Glencore has too much influence in politics and economics, she said the mining ministriy, which is under the leadership of Kabila's FCC, could target the firm's other operations in the DRC in order to force its hand.

"A further encroachment by the government against Glencore's other interests is a very real possibility," she warned.