A sculpture from the 1960s has achieved world fame overnight after becoming the most expensive artwork ever sold at an auction. Its previous owner, a German bank, already has plans for the profits generated by the sale. 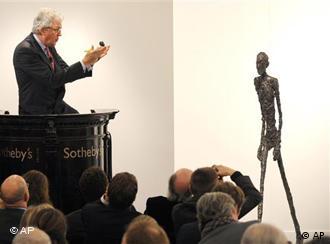 A life-size bronze sculpture entitled "L'homme qui marche I" ("Walking Man I") by Swiss artist Alberto Giacometti has been sold by the Sotheby's auction house in London for 65 million pounds ($104.3 million). This is the highest price ever paid for a work of art at an auction.

According to Sotheby's, it only took eight minutes of "fast and furious" bidding between ten prospective buyers before the piece was sold to an anonymous phone bidder. It had been estimated to sell for 12 to 18 million pounds.

The thin sculpture depicts a man in mid-stride with his arms hanging at his side. Commenting on the price achieved in the sale, Helena Newman, vice chairman of Sotheby's impressionist and modern art department worldwide, said, "The price is a reflection of the extraordinary importance of this exceptionally rare work, and the only life-time cast of this iconic subject ever to have come to auction." 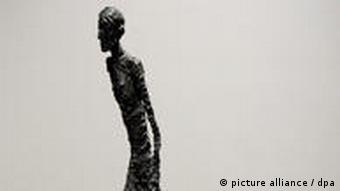 Cast in 1961, "L'Homme Qui Marche I" belonged to the art collection of Germany's Dresdner Bank before coming into possession of Commerzbank when it took over Dresdner Bank in 2009.

Following the unexpected price record, Commerzbank is "very happy about this big success," a spokeswoman for the bank told Deutsche Welle. Proceeds from the sale are to go towards supporting Commerzbank's foundations and a number of selected museums.

Commerzbank is set to restructure the art collection of the former Dresdner Bank as part of the ongoing integration process. Around 100 outstanding modern and contemporary works will be made available to museums in Frankfurt, Dresden and Berlin on a permanent loan basis.

"We want as many people as possible to be able to see the works in the art collection of the former Dresdner Bank, and are keen to support the museums in expanding the focus of their collections," said Martin Blessing, CEO of Commerzbank.

When the economy is shaky, art collectors turn their attention to works sure to be sound investments: Matisse, Raphael, and even Warhol. That's bad news for contemporary artists, but at least the market is afloat. (19.01.2010)

Yet again, two works by Edvard Munch have been reported stolen, but by now, that's practically become old hat. An art detective agency explains why Munch thefts get so much attention, and how they can be found again. (19.11.2009)