Ghana swears in Akufo-Addo as president

Nana Akufo-Addo has been sworn in as Ghana's new president at a ceremony in the capital, Accra. The 72-year-old won last month's elections, promising to stamp out corruption and boost economic growth. 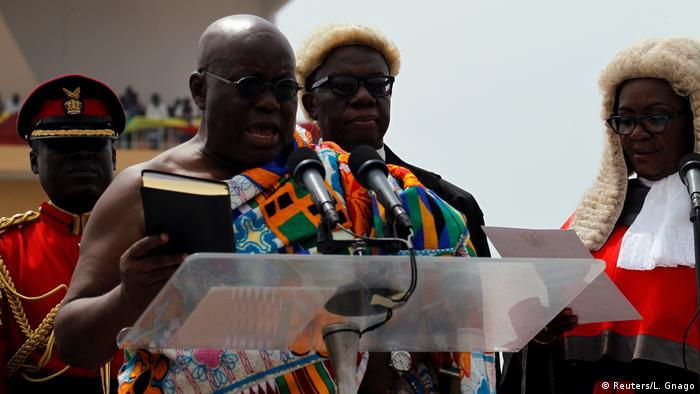 After two failed bids, Nana Akufo-Addo has managed to clinch Ghana's presidency. He had long been seen as an aloof elitist, but now many Ghanaians hope the 72-year-old will be the one to fix the economy and create jobs. (09.12.2016)

Gambia: 'There is fear. Everybody is fearful'

In two weeks time, President Yahya Jammeh of Gambia faces a deadline to hand over power to his elected successor. If he misses it, he faces the threat of a military intervention by regional ECOWAS forces. (05.01.2017)

"I pledged to do my best to move this country to [a] higher level of development," Akufo-Addo told the crowd in his inaugural address as head of state.

"I'll not let the good people of Ghana down…We will reduce taxes to recover the momentum of our economy. Ghana is open for business again."

The former human rights lawyer repeated his campaign promise to support entrepreneurs, attract investors and work with Ghana's neighbors "to ensure stability on the African continent."

The ceremony marked the fourth time a Ghanaian president has peacefully stepped aside to make way for a newly elected leader. Akufo-Addo defeated incumbent John Dramani Mahama in elections in December that were largely seen as a referendum on the ruling party's management of the economy.

Vice President Mahamudu Bawumia was also sworn in at Saturday's ceremony, which was attended by a number of dignitaries, including Nigerian President Muhammadu Buhari and Kenyan President Uhuru Kenyatta. After the inauguration, the leaders were expected to meet for talks to discuss the crisis in Gambia, where President Yahya Jammeh is refusing to step down after losing recent elections.

Gold-rich Ghana is considered one of Africa's most stable democracies, but an economic slump has hampered growth and caused public debt to rise.