After two failed bids, Nana Akufo-Addo has managed to clinch Ghana's presidency. He had long been seen as an aloof elitist, but now many Ghanaians hope the 72-year-old will be the one to fix the economy and create jobs. 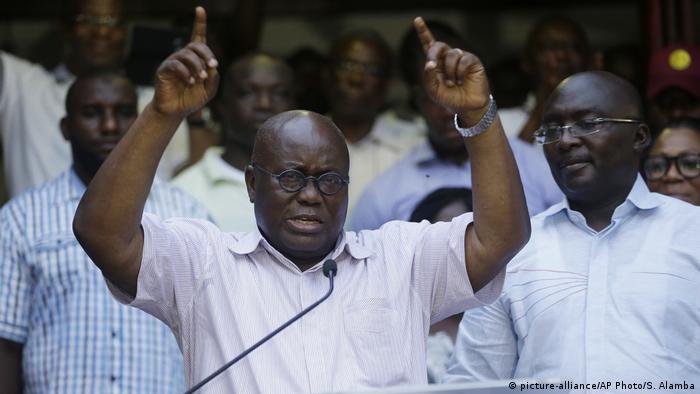 Akufo-Addo secured 53.85 percent of the vote, whereas President John Dramani Mahama received 44.4 percent, according to the election commission.

In what was widely seen as his last chance to clinch Ghana's presidency, Nana Akufo-Addo has been swept into office by a majority of Ghanaian voters desirous of change. After two failed attempts, the 72-year-old veteran politician managed to defeat charismatic incumbent John Mahama and will now take charge of the West African nation that his father ruled from 1970 to 1972.

In previous campaigns, Akufo-Addo had struggled to fight his image as an aloof elitist.

Born in the country's eastern region, he is related to three of the "Big Six" politicians who are considered to be Ghana's founding fathers. He was educated at a prestigious British secondary school and spent some time studying at a college in Oxford.

The man to bring about change?

"In the 2008 and 2012 elections, I read and heard that he was perceived to be an arrogant intellectual. It was very hard for him to establish contact to the population," Burkhardt Hellemann, head of the Ghana office of the German Konrad Adenauer political foundation, told DW before the polls. 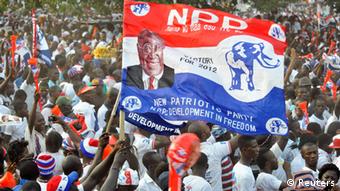 Akufo-Addo's election campaign was more successful than in 2012

Akufo-Addo's claim that he had lost the 2012 polls because of electoral fraud also did not go down well, even with parts of his own NPP party, after Ghana's highest court and election observers dismissed the allegations.

He finally accepted a Supreme Court verdict that upheld John Mahama's presidency. During this year's campaigns, Akufo-Addo's promises fell on fertile ground with voters tired of a sluggish economy, a never-ending energy crisis and a number of corruption scandals. Economic growth dropped by ten percent between 2011 and 2015.

"His visions and his statements seem to be more appealing to the people," priest and election observer Clement Adjei told DW during campaigning.

"If you look at the atmosphere, it seems as if the majority is in for a change because of the hardships many Ghanaians go through," he said.

Akufo-Addo ran on a campaign ticket promising a series of measures to stimulate the economy and increase employment.

"We will expand the economy and strengthen Ghanaian enterprises and the private sector. We also want to devote a lot of our energy into reviving the agricultural sector. That is the way forward to creating jobs," he told DW a day before the elections.

"We are going to cut out a lot of the waste and corruption of the Mahama era and make sure that the finances of our country are on a healthy footing," Akufo-Addo said.

"We will welcome it if he can bring work to the youth. If he brings us work, we'll work so we'll be free," a supporter waiting in front of Akufo-Addo's Accra home told a DW correspondent while unofficial results from the election were trickling in.

Akufo-Addo will be sworn in as Ghana's next president in January 2017. But it remains to be seen if he will be able to run for a constitutionally allowed second term in 2020 - as he will then be 76 years old.