Germany's EU commissioner has apologized for comments critics said were racist and homophobic. Günther Oettinger will be the next EU budget commissioner. 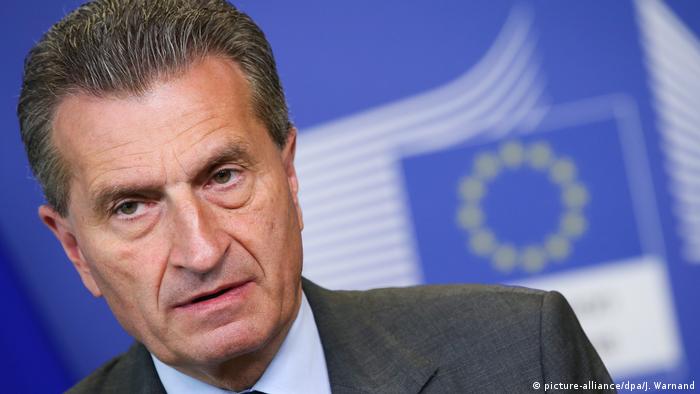 Günther Oettinger, the European commissioner from Germany and former state premier, formally apologized on Thursday for his racist and homophobic comments that drew a storm of criticism.

Earlier in the week, a video emerged in which the future EU budget commissioner referred to Chinese as "slanted eyed" and questioned whether Germany would implement "obligatory gay marriage."

"I can now see that the words I used have created bad feelings and may even have hurt people," Oettinger said in a statement. "This was not my intention and I would like to apologize for any remark that was not as respectful as it should have been."

Oettinger's comments were made at an event in Hamburg, where he discussed the EU's weaknesses.

"Last week Chinese ministers were with us for the annual China-EU summit. Nine men, one party. No democracy. No women's quota, no women," Oettinger said of the chinese diplomats. "All of them in suits, single-breasted jackets, dark blue. All of them had their hair combed from the left to the right with black shoe polish."

He later told the German newspaper "Die Welt" on Wednesday that his comments were meant to warn against German complacency in the digital sector and highlight the need for Europe to catch up to countries like China and South Korea. He had also told European news site EurActiv on Wednesday that he had nothing to apologize for.

The video also showed Oettinger criticizing Germany's current political agenda, listing off issues such as maternity leave, retirement and child care allowances. He finished the list by saying that "perhaps compulsory gay marriage will be introduced."

Beijing has slammed EU Digital Economy Commisions Günter Oettinger for his derogatory remarks about Chinese diplomats. The controversy-prone politician has said his comments were taken out of context. (02.11.2016)