The recent reopening of archives from 1989 has revealed embarrassing bigotry in some former European leaders. The release of the secret files to coincide with anniversary celebrations is meant as a kind of redemption. 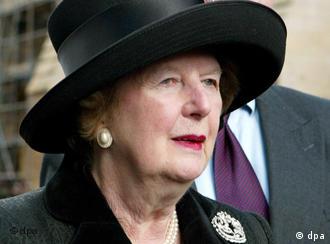 Margaret Thatcher was openly hostile to the reunification of Germany

Germans have often noted British tourists' World War II obsession with a mixture of bemusement and dismay. But recent revelations have shown that this preoccupation, usually expressed in the un-threatening confines of comedy, was also the British prime minister's deep personal phobia at the time of Germany's reunification.

While USA and, surprisingly, the Soviet Union, largely welcomed the moment of redemption and euphoria that ushered in the end of a black century, Germany's non-superpower neighbors were prey to old fears.

"It is still an uncomfortable thought," Professor Paul Nolte, who teaches history at the Free University in Berlin, told Deutsche Welle, "That something that Germans were so happy about, and that unified Europe, could have been rejected by our closest partners. We ask ourselves, 'How could anyone have been against it?' "

At the end of October this year, France followed Britain in releasing its foreign policy archives from 1989 and 1990 in the run-up to the reunification of Germany. Although the files will not precipitate a major reassessment of history, they illustrate the depth of fear among western leaders who were publicly celebrating the victory of democratic freedom over communism.

In a telegram found in the French archives and dated March 13, 1990, Prime Minister Margaret Thatcher is quoted by the French ambassador in London describing Chancellor Helmut Kohl as being "capable of anything. He has become a different man. He does not know who he is anymore. He sees himself as the master and is starting to act like it."

The lack of empathy between Kohl and Thatcher is well-documented - for his part, Kohl once remarked that he feared the British leader as "the devil fears holy water" - nor is there much of a secret around Thatcher's hostility to reunification, which her memoirs had already made clear.

The files newly released by the British Foreign Office do little more than confirm the German image of Thatcher. "This doesn't change the total picture much," says Andreas Roedder, a professor at the University of Mainz who published a book on reunification this year, "But the details fill it out."

On the other hand, Nolte was surprised by the skepticism that French president Francois Mitterrand apparently had toward German reunification. "That's the biggest revelation from my point of view," he told Deutsche Welle.

Even Francois Mitterand, left, harbored misgivings about having a new, unified neighbor

The speed with which Germany under Kohl moved toward reunification seems to have taken Europe's leaders by surprise. In October 1989 an analysis of the "German question" by the French Foreign Ministry judged that reunification "does not appear realistic at this moment."

In a letter dated Nov. 24, 1989 from Mitterrand to East German leader Egon Krenz, the French president talked of "perspectives of development in relations with the German Democratic Republic and the European Community." Four days later Kohl introduced his 10-point unification plan to the world.

By presenting this program, the normally wary Kohl shrewdly seized the initiative both at home, where the opposition Social Democrats were threatening to steal the issue from him, and abroad. Among the 244 newly released Foreign Office documents, British ambassador in Bonn Sir Christopher Mallaby summed up its significance on the same day.

"The key point is that the pressures have reached a level where Kohl has felt obliged to make a high profile statement of a policy expressly intended to lead in time to German unity," he wrote to the British government, "And he has done so on his own authority, not on behalf of the whole coalition, and without prior consultation with the Allies … It shows how fast the German question is moving." In response, Thatcher remarked, "Christopher Mallaby seems to welcome reunification."

Read more about the allies' concerns

Nearly 20 years after the fall of the Wall, communist East Germany is an enigma for young Germans. Some do not even know who built the Wall that divided Germany for decades, but educators are trying to change that. (29.10.2009)

The former leaders of the USSR, West Germany and the US met in Berlin Saturday to remember the events that lead to opening the Berlin Wall on November 9, 1989. (31.10.2009)

A few months before the 20th anniversary of the Berlin Wall's fall, the British Foreign Office has released thousands of declassified documents detailing the UK government's reactions to the reunification of Germany. (11.09.2009)