Germany is mourning its best known literary critic. Marcel Reich-Ranicki was one of the few Jewish public figures to resettle in Germany after World War II. 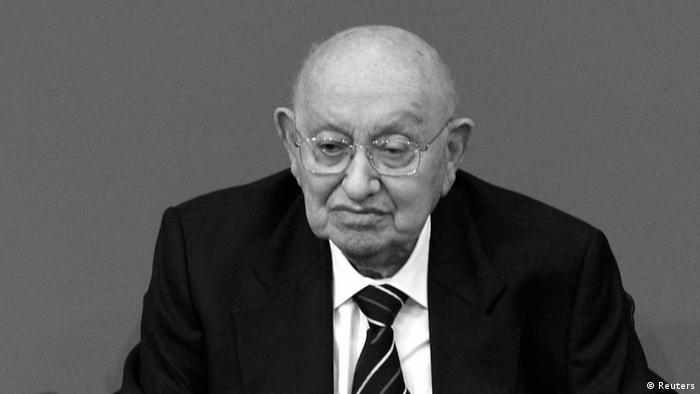 Born in 1920 in Wloclawek, Poland, Marcel Reich-Ranicki was the son of a Jewish factory owner. He was later sent by his family to Berlin to attend high school there. However, because he was Jewish, he was denied entry to the university in 1938, several years after the Nazi rule had begun.

He was deported to Poland, but later was able to flee the Warsaw Ghetto with his wife, Tosia. In 1958, he returned to Germany and dedicated himself to the study of German language and literature - and saw an opening for himself in the world of German letters.

"When I came to Germany in '58, and I saw what people were writing about literature in the [newspapers here], I told my wife: I want to do an experiment," Reich-Ranicki said in an acceptance speech after receiving the North Rhine-Westphalia State Prize in 2005.

"I will say loud and clear what I think about books. It is risky, and two things could happen: I will either rise to the top of the literary criticism hierarchy, or sink to the very bottom. But I have to try," he said.

Marcel Reich-Ranicki, Germany's best known literary critic, has passed away aged 93. His long career and definitive pronouncements earned him the nickname "the pope of German letters." (18.09.2013)

Reich-Ranicki was in charge of the literature section of the national newspaper Frankfurter Allgemeine Zeitung in the 1970s, and hosted the television book discussion program "Literary Quartet" throughout the 1990's.

His appearances as the head critic on television's "Literary Quartet" brought him a large audience.

Some famous German authors such as Peter Handke, Günter Grass and Martin Walser were singled out by Reich-Ranicki's scathing criticism.

When he wrote his own life story it became a bestseller – and was also turned into a successful film.

Reich-Ranicki didn't mince words. He caused a major uproar in 2008, when he was to receive an honorary German Television Prize for his cultural contributions.

He sat in the audience through several hours of the show ,during which the prizes were handed out; and when it was his turn he stunned viewers by rejecting it.

"I cannot accept this prize," Reich-Ranicki told the shocked audience. "I didn't know what to expect here, and I think it is awful that I had to sit through this for so many hours."