Germany′s high-speed Internet is lagging behind | Business | Economy and finance news from a German perspective | DW | 13.03.2015

Germany's high-speed Internet is lagging behind

By 2018, every German household is meant to get high-speed Internet, but the expansion work is lagging, putting German businesses at a disadvantage. Critics say the country needs billions in investment to catch up.

Germany is lagging behind in building up its high-speed Internet network. Fiber-optic data highways - at least 20 times faster than a regular DSL connection - are barely available outside big cities. As hard as it might be to believe, Germany has the lowest fiber-optic coverage in all of Europe, with just 1 percent.

That's a clear disadvantage for German businesses, especially as many companies are located in non-urban areas, which means they simply cannot use a lot of the latest technologies. If something isn't done soon, Germany's digital revolution will be on hold.

The German government is now finally acting. The goal is to bring 50-megabit-per-second Internet to every single German household by 2018. The current average is 8.7 megabits per second.

To combat this, the Ministry of Transport and Digital Infrastructure has now started its new "network alliance for a digital Germany." Its members include a number of trade federations and various telecom companies, who are expected to provide a large part of the investment. In 2015 alone, Internet operators like Deutsche Telekom, Vodafone or Telefonica are to invest some 8 billion euros ($8.5 billion) in expanding broadband infrastructure, and even small network operators like Inexio are pitching in.

Inexio is building in places where it is particularly expensive. Connections have to be laid anew, requiring expensive underground construction. With 5,000 kilometers (3,100 miles) of its own grid and 160 employees, the Saarland company is a relatively minor player, but the company has just succeeded in putting Saarbrücken airport on the fiber-optic grid with an investment of 2.5 million euros.

"The problem is that projects the size of an airport can't be realized with just one customer," says Inexio CEO David Zimmer. "We live by synergies. We have to find customers and keep them on-side."

For that reason, Inexio connected a nearby village to the grid at the same time, which means that the company will invest 1,400 euros per customer, hoping to recoup the money through monthly payments. But if the company can't keep those customers for eight to 10 years, it will make a loss. Zimmer isn't worried, though, because he believes his company offers a faster, cheaper service than his competitors.

Meanwhile, Germany's biggest Internet provider, Deutsche Telekom, has said it wants to reconnect 5.9 million households by 2018. But the company, formerly state-owned, has received criticism, because Telekom's network is made up in large part of copper cables, much too slow for high-speed Internet purposes. The company's plan is to revamp its 330,000 junction boxes with so-called "vectoring technology," and so make the Internet connection up to four times faster.

The problem is these boxes are also being used by competitors who won't have access to the new technology - a clear advantage for Telekom. Breko, a federation for broadband communications companies, has described this as re-monopolization. And there has been criticism from elsewhere too - in the long term, vectoring technology won't be enough to guarantee fast Internet for all households, according to the "Monitoring Report" published by the Economy Ministry. 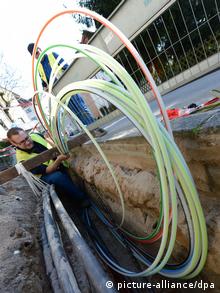 Cap in hand to the government

Vodafone, Germany's second biggest telecom operator, also wants to invest heavily in the next two years - approximately 5 billion euros to renew the grid and provide faster Internet via mobile networks, cable, and DSL. But the company apparently doesn't think it can do all the work alone. "I think it won't be possible without state investments," says chief strategist Anna Dimitrova. "There are locations a long way away from the data highways. That can only be done economically if the government invests too."

The German government has pledged to invest around 10 billion euros in broadband expansion. On top of that, they are hoping to add the proceeds from auctioning off digital frequencies. The auction will begin in early summer - frequencies that have previously been used by televisions with digital antennae can be sold off by the network operators and used for mobile broadband Internet. The government wants to invest what it makes from that into infrastructure - but no one knows exactly how much it will be.

But none of this is enough for Germany's Economic Council, which represents thousands of German businesses of all sizes. For a start, it says the government's target of 50 megabits a second is too low. "Digitalization is increasingly taking in all kinds of business and production processes, and so offers innovative mid-sized firms a lot of opportunities," its President Kurt J. Lauk says. "It's unacceptable for us to miss the boat just because our infrastructure isn't fast enough." At the moment, around 40 percent of German households don't have high-speed Internet. Whether that can be remedied by 2018 is unclear - and even if it's possible, might a much faster Internet be necessary by then?

Bringing people together: The global power of virtual formats in higher education

Board any bus in Portugal's second-largest city, and you've got free Wi-Fi - courtesy of a network of routers affixed to more than 600 municipal vehicles. It's the biggest Wi-Fi-in-motion network in the world. (09.03.2015)

Europeans free to 'roam if you want to' - but without phones, without data

This was going to be a big year for Europe: an end to roaming charges (no worries texting at the beach), net neutrality, and new rules on data protection. Well, looks like we can forget the first of those. (06.03.2015)

German Chancellor Olaf Scholz and his deputy Robert Habeck are on a three-day visit seeking to sign a hydrogen production deal with Canada and foster new energy ties amid Russia's invasion of Ukraine.

Germans love to game. So why has the country's video game industry stayed so small? A nongamer reports from the world's biggest gaming trade fair in Cologne.