Germany′s far-right AfD can be put under surveillance | Germany | News and in-depth reporting from Berlin and beyond | DW | 08.03.2022

Germany's far-right AfD can be put under surveillance 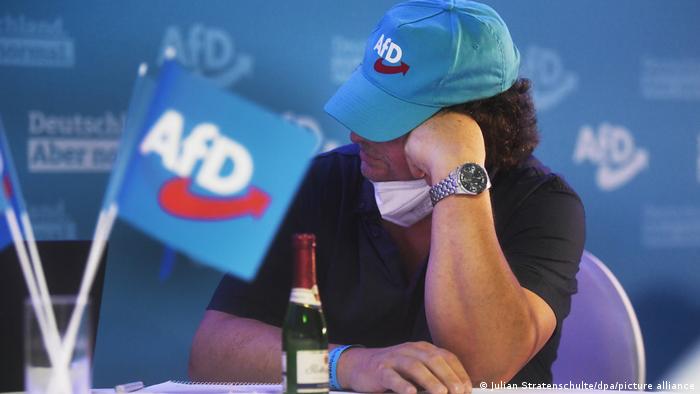 The AfD can be labeled as a suspicious entity, granting investigators more power to keep tabs on it

Germanyˈs domestic intelligence agency has the right to surveil the populist far-right Alternative for Germany (AfD) as part of its remit to monitor extremism, a court in Cologne ruled on Tuesday.

The AfD is the countryˈs most right-wing party represented in parliament and had been categorized as a "suspicious entity" by the Office for the Protection of the Constitution (BfV) over concerns of increasing radicalization, especially within its youth organization.

The AfD had taken the matter to court to stop what it called the "politically motivated" investigation, arguing that the categorization would amount to a ban. They also claimed that the controversial extreme-right "Flügel" (wing) of the party had already been disbanded two years ago. 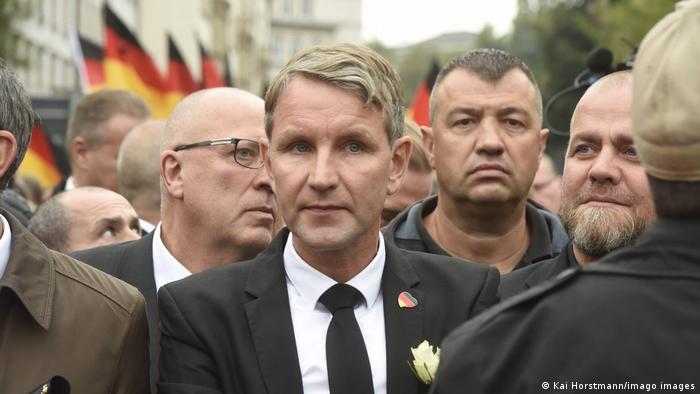 Björn Höcke, AfD leader in Thuringia, is one of the party's most influential figures on the extreme right

But the Administrative Court of Cologne found that there was more than sufficient evidence that the AfD was advocating an anti-constitutional ethnic concept, which the agency considers incompatible with human dignity as guaranteed in the German Basic Law. The judges found that even if the "Flügel" had been officially dissolved, its members were still active and influential within the party, as well as the "Junge Alternative" (JA) youth organization adhere to xenophobic concepts similar to those of Nazi Germany decades ago.

AfD chairman Tino Chrupalla said the party was "surprised" by the verdict, but vowed to explore all legal avenues to appeal it.

A first in post-war history

Although there are still a few legal hurdles to clear before the BfV is allowed to use informants or surveillance measures such as wiretaps, the decision marks the first time in post-war Germany that such a large party — the AfD is represented in the European Parliament, the Bundestag, as well as all state legislatures — will be surveilled by intelligence agents.

After the verdict, BfV President Thomas Haldenwang spoke of a "good day for democracy".

In the past, the BfV has investigated members of the Left Party suspecting them of intending to replace the existing economic, political and social order with a socialist or communist system, but those investigations came to naught. It also infiltrated the neo-Nazi NPD with so many informants that a case to ban the party outright was thrown out over concerns that there were more spies in the party than dedicated members.

The fall-out for AfD members

The verdict may have immediate consequences for AfD members in the civil service, says DW political correspondent Hans Pfeifer.

"There are members of the party who are civil servants; police officers, district attorneys, teachers, judges," Pfeifer said, now their employers could argue that they have failed to uphold their oath to protect the constitution and fire them.

The court decision could also have an impact on AfD lawmakers in the Bundestag. Government and opposition MPs were quick to point out that members of a party that is suspected of breaching the constitution, would face a conflict of interest if they sat on committees overseeing the country's intelligence services.

The chairman of the Parliamentary Control Body in the Bundestag, Roderich Kiesewetter of the main opposition party, the center-right Christian Democrat (CDU) told ZDF: "If this ruling is confirmed, it will not be possible for a party that is classified as a suspicious case to be a member of the Parliamentary Control Board which controls the intelligence services of the federal government."

The former president of the Central Council of Jews in Germany, Charlotte Knobloch, described Tuesday's verdict as "a victory for the defensible constitutional state and a clear sign that democracy must not stand idly by and watch the machinations of its opponents." She told the FAZ daily that it was a sign "that all people can live safely and without fear in Germany. If a party borrows from National Socialism and openly associates itself with enemies of democracy at home and abroad, then the institutions of the rule of law must be able to keep a close eye on it."

Knobloch said she hoped this would also help sway voters: "I hope that the voters of the AfD will now finally also become aware of who they have sent to the parliaments."

But DW's Hans Pfeifer is less optimistic. While the verdict may make it more difficult for AfD supporters to claim that they are a mainstream conservative party, the verdict could be used to the partyˈs advantage, playing into their narrative that "this is just another way the government is trying to repress the opposition."

"They can turn this around, like the alt-right does in the US," Pfeifer said, "theyˈve already begun using it as a tool to de-legitimize the BfV and other government institutions, by insinuating that the mainstream political establishment has it out for them."

This article has been updated and expanded since its publication.

Darko Janjevic and Mark Hallam contributed to the report.

The longtime leader and AfD spokesperson said he could no longer fend off the party's more extremist faction. He had already announced his intention to step down as co-chair, but now plans to leave the party entirely.

DW looks at the populist Alternative for Germany (AfD) party. It was founded in 2013 by euroskeptics, but began campaigning on an anti-immigration platform in 2015.