2017 was Africa Year in Germany. One aim was to increase private investment in Africa. For Stefan Liebing, head of the German-African Business Association, not all the goals have been met. Stefan Liebing: I think we have to differentiate. It was certainly a success to bring the topic of Africa and private investment in Africa into the arena of public debate. In particular, the attention that was generated by the G20 process. On the other hand, many declarations of goodwill and good ideas have not been followed by any concrete implementation plans. And so I would say the direction taken is good but we are not yet where we should be.

Please give some examples of declarations of intent which have not yet been translated into concrete programs.

To be honest, not one of the declarations of intent has been implemented so far. There is the so-called "Marshall Plan for Africa," the  economics ministry  has presented an Africa concept and the cabinet has agreed on an Africa paper. In all these plans, the basic ideas are correct. However, they not been turned into concrete measures, support instruments, insurance and warranty tools.

What is the reason for this?

I think it has something to do with the fact that the ministries started to come up with their own ideas in a somewhat uncoordinated way. Only shortly before the G20 summit and the German elections were they put together by the cabinet. This paper is now on the table but cannot be implemented as Germany still only has a caretaker government. I am optimistic that the new government will tackle this. But first we need a coalition agreement and new ministerial appointments.

What  should the new government do in terms of promoting German investment in Africa?

Nobody needs subsidies. But we have a lot of medium-sized companies that are currently hesitant to do things that could help development in Africa. Renewable energy, electrification, infrastructure are some of the key words here. If medium-sized companies cannot go to Africa on their own, then it is necessary to reduce their risks by offering new methods of financing and securities. We at the German-African Business Association (Afrika-Verein der deutschen Wirtschaft) have suggested a number of measures that I think could encourage companies to get more involved in Africa and create jobs there.

What exactly do you mean when you talk about minimising risks?

For example, there are quite a few countries for which companies do not get so-called Hermes guarantees. Companies then run the risk that their partners cannot pay or governments do not stick to contracts. That needs to change. Another point is that we are particularly strong in the field of renewable energies, and our partners in Africa know that. But when we build solar or wind farms, we often sell the electricity to relatively weak or even bankrupt energy companies. We need safeguards for trading with such companies, we need institutions that will step in and take over the payments if,  at some point in the future, the companies cannot meet their obligations. Only when there are such securities, can the German developers of  wind and solar projects mobilize capital or bank loans. Turkish, Chinese and some French companies do this better. 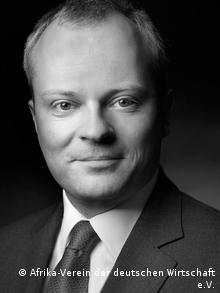 Your association speaks of Africa as "the continent of opportunity." Would it not make sense for German companies to go ahead, see what  kind of programs come from the new German government and then expand their activities?

That's right and we already have more than a thousand German companies working every day in Africa. Earlier this month, I was in West Africa with Federal President Steinmeier, who was accompanied by almost 20 German business delegates, all  of whom are pursuing concrete projects on the continent. However, we also need to get the message across to the broader middle class business community. We have more than 400,000 German companies operating abroad, of which 1,000 are in Africa. The difference between these groups is the target audience we need to address. Because only when the German medium-sized companies understand what's happening in Africa and what opportunities exist, then we can also do something to create jobs there and perhaps help reduce the flow of refugees. That can only work if the federal government also shows that it is as willing to accept risks as it expects medium-sized companies to be. That is also part of the concept of this G20 partnership. We want to help the African partners to create the conditions that will attract private funds. I think that will only succeed if we can offer guarantees and safeguards.

What are German companies willing to do to create jobs that really benefit local people and which improve their living conditions?

There are quite a few success stories here. Volkswagen recently set up several plants in Africa. Overall, there is increasing interest in the automobile industry. In January we plan to present a new project in which companies from the renewable energy sector in northern Germany have joined up to export this energy transition to Africa. We have just launched a start-up initiative in which we bring IT companies from Africa together with German startups. There are many initiatives and success stories. But if we want to reach a new level, if we want to talk about hundreds of thousands of jobs being created rather than just thousands, then we need more state support.

Are companies willing to use their own money to make it possible for employees in Africa to gain qualifications that will enable them not only to work as unskilled laborers but also to work at a higher level  for higher pay?

Yes, of course. I have just visited a cement factory in Namibia built by a German company. There is no longer a single German among the workforce of several hundred. The manager is now also a local man. The company has set up a training center for the workers. But what is important is that training must be followed by job offers. There is no point in building training centers and and then disappointing people because they cannot be taken on. Training must be designed to suit local conditions and needs. Here, too, there is a need for closer coordination between German development cooperation, which is active in the field of training, and the companies which can say where jobs are needed.

Stefan Liebing is the current head of the German-African Business Association (Afrika-Verein der deutschen Wirtschaft)  which represents German companies and institutions with an interest in Africa.

The interview was conducted by Daniel Pelz.

Nigeria's new ambassador to Germany, Yusuf Tuggar, discusses taking up the post in Berlin, which has been vacant for three years, and how the growing relationship between the two countries can be strengthened further. (19.09.2017)

German Development Minister Gerd Müller has been canvassing support for his 'Marshall Plan with Africa' at the African Development Bank in Ivory Coast. Some bankers thought his discussion paper lacked detail. (03.03.2017)