Following protests by Hindu groups who say they've used the swastika as a religious symbol for millennia, Germany announced Monday that it has dropped plans to outlaw the sign throughout the European Union. 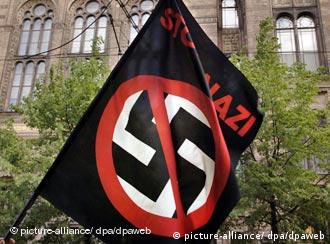 In Germany, even carrying this sign has led to a conviction in court

Germany, which currently holds the EU's rotating presidency, still wants to make Holocaust denial illegal throughout the EU to stem racism and xenophobia.

"Public incitement of violence and hatred or the denial or trivialization of genocide with racist or xenophobic motives" should be criminalized EU-wide, German officials said in Brussels on Monday. "But the plan does not include a ban on certain symbols such as swastikas."

The German EU presidency hopes that EU members will come to an agreement on the plan during the meeting in Luxembourg on April 19 and 20.

A similar attempt to make Holocaust denial illegal by Luxembourg in 2005 was blocked by Britain, Denmark and notably Italy, where Silvio Berlusconi's center-right coalition was still in power. The new Italian government under Romano Prodi introduced a national bill over the weekend that would impose jail time for inciting racial hatred.

Jan. 27 was Holocaust Memorial Day in Germany. Meanwhile, Germany's efforts to criminalize Holocaust denial in the EU are increasing coming up against resistance. See what other readers had to say on the matter. (29.01.2007)

Prague's Jewish Museum has launched an unusual ad campaign that aims to interest young people in history by reminding them of the fate of Jews before and during World War II. (27.01.2007)