Lübeck's Mayor Jan Lindenau called in an expert company to open the safes, which are at least 70 years old. He joked he had hoped to find gold to go towards the city budget. They let curiosity get the better of them — Mayor of Lübeck Jan Lindenau ordered the city to crack open two old safes on Tuesday. Inside they found commemorative coins and tour tickets, costing 1.50 deutschmarks each.

The safes, one weighing a ton, have sat unopened in the city hall of the northern German city for at least 20 years.

They contained 30 silver Thomas Mann commemorative coins and a gold commemorative coin for the Lübeck Senate, plus a roll of tickets for the city hall tour. The roll of tour tickets cost 1.50 deutschmarks each (€0.76 at the fixed exchange rate at the end of 2001, when the euro currency was introduced as cash) — today the same tour costs €4.

Mayor Lindenau joked he had hoped for "a few gold bars that would help us with the balancing of the budget.”

The safes, and the combinations to open them, had been forgotten over time; local newspaper Lübecker Nachrichten reported that one contained sensitive files from early in the Cold War on the East-West German border. Lübeck, near Germany's northern coast, between Hamburg and Kiel, was just a few kilometers from the former border to East Germany. 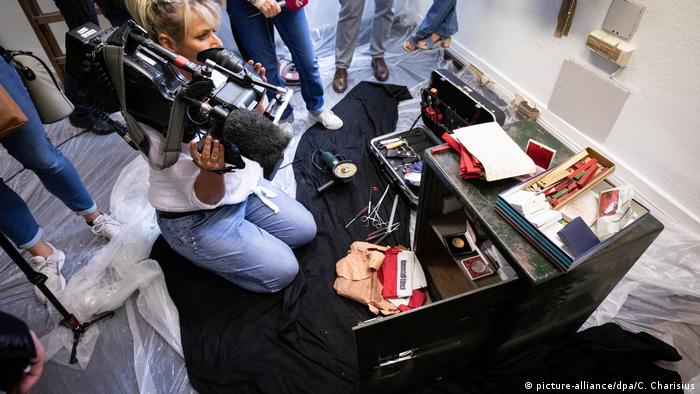 The safes revealed a number of artifacts, including tickets which cost 1.50 deutschmarks.

It took safety engineer Sebastian Hahn around eight hours to break into the bigger safe, according to German news agency dpa. Pure curiosity led the mayor to open the safes, which Hahn estimated to be around 70 years old.

"There are two more unopened safes in the town hall, which we want to open," he said.

Lübeck's archive director Jan Lokers said he had hoped other treasures would be revealed. The city's Golden Book is missing its pages dated from between 1933 and 1945, during Adolf Hitler and the Nazis' rule of Germany.

"They were neatly cut out after 1945, and since then they have disappeared," Lokers said.

The mayor did not say when he would be opening the other safes, but renovation work is planned for the building in the coming months, and such a project would happen before that begins.

Pischetsrieder tapped to chair Daimler supervisory board from 2021 0m ago

Large explosion at Bristol wastewater facility in England 2h ago