A year after Germany hosted the men's soccer World Cup to global acclaim, the sport's governing body announced in Zurich that the women’s World Cup in 2011 will also be staged in Germany. 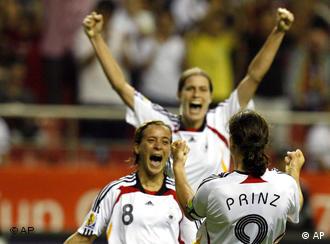 FIFA's executive committee announced on Tuesday that Germany had won the vote ahead of fellow bidders Canada to host the prestigious tournament in four years' time. The 2011 competition will be the first time in 16 years that a European nation has staged the women's World Cup.

"The organizer of FIFA's Women's World Cup of 2011 is the football association of Deutschland," FIFA President Sepp Blatter announced to wild celebrations from the German bid team.

Many of the Germany's ladies' team, back-to-back World Cup winners after this summer's triumph in China, turned up to support the final presentation during which the bid team used imagery and statistics from the previous year's successful men's tournament.

Germany to welcome back the world 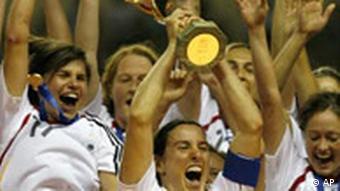 Germany will again stage the greatest soccer show on earth

Under the bid motto of "Welcome back," Germany players such as Birgit Prinz and Fatmira Bajramaj added their star quality to the final push, emphasising the pedigree of the German national team and the country's sporting infrastructure.

The successful German bid will utilize the Berlin and Frankfurt stadiums used in the 2006 World Cup and ten others during the 2011 tournament.

German Chancellor Angela Merkel, currently touring India, said: "I congratulate the DFB on its success in bringing the 2011 World Cup to Germany. It is a further opportunity for us to celebrate a wonderful soccer festival in Germany with friends from all over the world."

German President Horst Koehler called it "great news for everyone connected with women's football in our country."

He added: "I'm convinced the Germans will again be good hosts in 2011 for a grandiose festival of football and friendship."

Following the FIFA announcement, German soccer association (DFB) president Theo Zwanziger said, "We are very proud and grateful for this distinction of being able to organize the 2011 women's World Cup after hosting the 2006 World Cup.

"A lot of progress has already been made in women's football and we promise not of course to imitate the 2006 World Cup but to organize a World Cup characterized by respect and fair play," he added.

German men's team coach, Joachim Löw, said on the DFB Web site: "I'm convinced the World Cup in Germany will be a great party, just like in the summer of 2006.

"The good atmosphere across the nation will help the German team complete the hat-trick of world titles."

German Family Affairs Minister Ursula Von der Leyen said that the 2011 World Cup was "a unique opportunity, a proof of confidence for a country like Germany which is very happy to be able to again welcome you in 2011."

"I think it's important for women's football. It provides new momentum for women's soccer," she added. 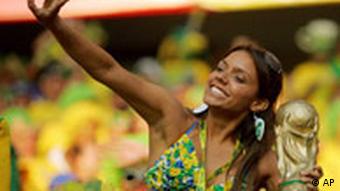 The 2014 World Cup will go ahead with some Samba style

FIFA president Blatter also announced that Brazil would host the men's competition in 2014. As the sole candidate for the tournament, it was no surprise that the South American nation won the vote.

Ricardo Teixeira, president of the Brazilian Soccer Confederation, said that the five-time world champions would present an environmentally friendly World Cup which would be "a great joy and an historic achievement for the country and the Brazilian people, one which will have an impact both on the social and economic level."

He added: "This World Cup will leave a permanent legacy" with improvements to transport, health, sewage and water systems as well as security, he noted. "The World Cup in Brazil will be the first mega world event to unite millions of people" the goals of fighting global warming.

UEFA president Michel Platini also welcomed Brazil as 2014 hosts. "Brazil is the country that has given the most to soccer. It's the biggest soccer nation in the world and has won the most World Cups. A World Cup in Brazil is like going on a pilgrimage to Mecca or Jerusalem."

Germany's national women's soccer team made history on Sunday, Sept 30 by becoming the first women's team to win the World Cup for the second time in a row as they beat Brazil 2-0 in the final in Shanghai. (01.10.2007)

The world's top female soccer teams are competing in China this month for the World Cup title. Click for a close-up look at some of Germany's key players in action. (21.09.2007)

Do you agree that Germany is the best country to host the 2011 Women's World Cup? Please include your full name and country with any reply.