The German state pledged millions in compensation to the clients of the now-defunct German arm of travel agency Thomas Cook. It is "not reasonable" to have the customers deal with the issue themselves, the Cabinet said. 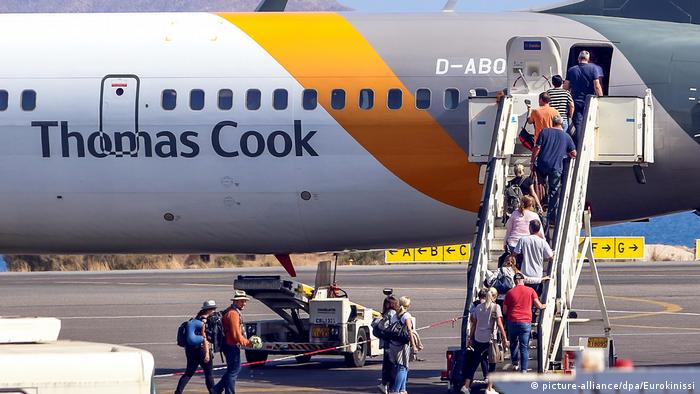 The collapse of the UK travel agency Thomas Cook in September sent out shockwaves that also brought down its subsidiaries in various EU countries, including Germany. On Wednesday, the German government stepped in with a pledge to compensate the clients of the agency's local subsidiary.

"The state will make good damage that is not otherwise compensated," a statement from the Chancellery said after a government meeting.

While Thomas Cook's Germany agency was insured against bankruptcy with the Zurich Insurance Group, the maximum €110 million ($122 million) payout is nowhere near enough to cover the expected expenses. Last month, the Swiss-based company said that they had already received claims totaling €250 million. However, the final amount is likely to reach between €300 million and €500 million, according to experts cited by Germany's public broadcaster ARD.

The government has now pledged to fill the gap from the federal budget.

Preventing a 'flood of lawsuits'

Justice and Consumer Protection Minister Christine Lambrecht said that the money would come from the "unplanned expenses" section of the financial plan.  One of the reasons for the government's pledge is to avert numerous compensation lawsuits that could burden courts.

"This is about preventing a flood of lawsuits and long trials, that also bring a very great risk of paying legal fees," Lambrecht said.

Separately, the government said that the collapse of Thomas Cook threw up many "difficult legal questions which are still unsolved."

"It is not reasonable to expect customers to deal with these complex legal questions on their own," the statement added.

The head of Germany's consumer association, Klaus Müller, praised the government's decision, but also criticized the company's inadequate insurance. Taxpayers would now be force to pay for "a political mistake and a lobbying success by the tourism and insurance sector," he said.

A senior lawmaker of the business-friendly FDP party, Michael Theurer, described the government's decision as a "confession of guilt."

"You can't socialize risks and privatize profits," he said.

The first details of the compensation scheme are to be published in early 2020.

Last month, the UK government also announced it was mulling its own compensation system for Thomas Cook holidaymakers.