Germany's first real-time test of electrified trucks fed via overhead cables amid heavy motorway traffic has begun near Frankfurt. The Environment Ministry hopes the project could contribute to climate-neutral haulage. 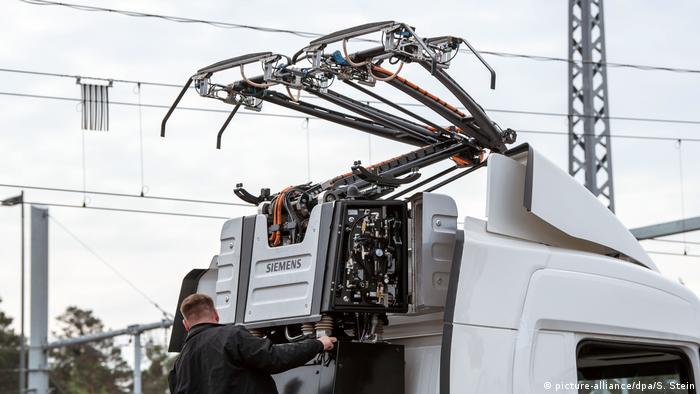 A project to electrify peak-use stretches of Germany's motorway network took its next step Tuesday, with a first hybrid electric-diesel truck merging into regular four-lane traffic flows on the Autobahn (motorway) 5 between Darmstadt and Frankfurt.

The five-kilometer (3-mile) eHighway stretch will be tested in both directions until 2022 using electricity from renewable sources, according to Hesse state's transport department, Hessen Mobil, after years of off-highway trials involving the engineering giant Siemens.

Last December, a hybrid truck made a night-time test run but only at slow velocity. From Tuesday, a first hybrid truck was being tested in normal heavy traffic. The system was initially developed on a disused military airfield near Berlin.

The development was a "milestone for efforts to decarbonize road freight traffic in Germany," said Roland Edel, the technological head of Siemens Mobility GmbH.

By mid-2020, five such trucks are to travel the test A5 autobahn stretch frequently every day, consisting of four lanes each way. The segment - between two autobahn junctions - carries 135,000 vehicles daily on average, approximately %10 of them heavy vehicles.

Overhead supply even under bridges

The test trucks are fitted with batteries and pantographs — sensor-fitted electric pickups — that reach automatically for the overhead cables (poled positive and negative) slung from several hundred masts along the A5's inner-most lanes, even under bridges.

Overtaking of other vehicles is intended as well as surplus power being fed back into the grid during braking manoeuvers, according to Hesse Mobil.

The 670-Volt direct-current cables are supposed to shut down automatically if severed accidentally, and during winter an anti-icing system should keep them operable. 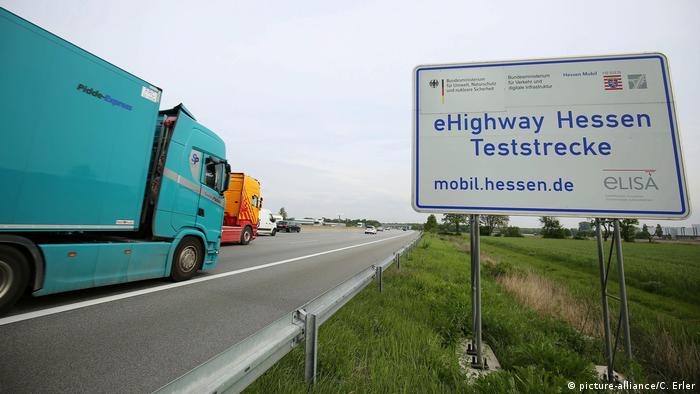 Funding for the test phase worth €15 million ($16 million) came from the Environment Ministry, whose spokesman Stephan Haufe said the outcome was "open-ended."

They would become energy-reloading stretches for hybrid trucks, giving them range far into into non-electrified areas, said Hesse Mobil, with the hybrids each carrying a diesel motor as a backup.

Hesse Mobil cited a federal transport ministry study that up to 80 percent of Germany's truck traffic could eventually be electrified, alongside Germany's overloaded rail network whose managers face a public clamour for major upgradings.

Similar tests had also been launched near Stockholm and Los Angeles since 2016.