Germany return of Müller and Hummels ruined by Poulsen 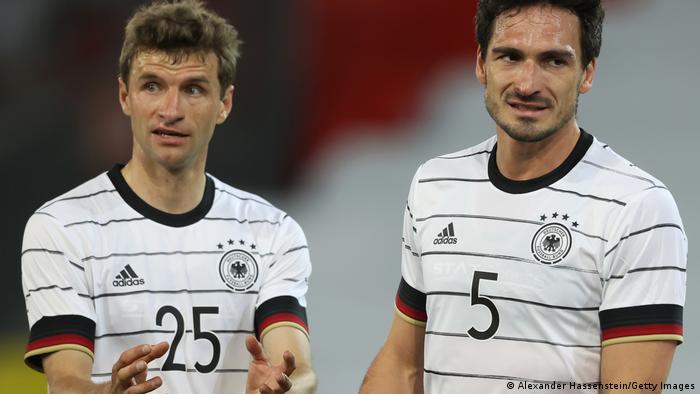 Thomas Müller and Mats Hummels made their Germany comebacks against Denmark

Germany's friendly against Denmark looked like the classic pre-tournament fixture for ironing out any final kinks. In truth, this was the first chance to see whether the return of Mats Hummels and Thomas Müller really would change Germany's fortunes.

The answer is as unclear as Germany's chances at Euro 2020, although Joachim Löw was keen to tell RTL afterwards that the pair had made a noticeable difference to the team's communication. "It was louder on the pitch than before."

With Löw returning to a back three that hasn't been kind to him, Niklas Süle outshone Hummels. The Bayern man looked like he had overcome his fitness issues and was the more dangerous vertical passer. Both though, were turned inside out and left sliding in desperation for Denmark's equalizer, scored by Yussuf Poulsen.

In attack, Müller led the line. He was busy and loud and should have scored in the first half, but he did a lot off the ball and aided Germany's gegenpressing. He occasionally swapped with Serge Gnabry, who looked the more dangerous attacker, but without a leading striker Müller inevitably looked different than in his club colors.

"I had to do a lot of running so I don't have an analysis ready to hand, but in attack, we were relatively clear and with a bit of luck the chances that hit the bar go in," Müller told RTL afterwards.

"You saw that we were up for it and that we can do a lot of things. If you [the media] thought it was a good game then it can't have been bad at all."

"Jogis Jungs" (Jogi's boys), as the banner in the stands read, were far from bad. They were solid and less error-prone than earlier in this year, but one superb pass by Christian Eriksen was enough to set up Denmark's equalizer and remind them that holding a lead remains a problem.

Florian Neuhaus' goal was bundled in after a goalmouth scramble but along with Müller, Gnabry, Hummels and Leroy Sané also missed the chance to add their names to the scoresheet.

Spectacular and clinical this side is still not though. To expect as much simply because of Hummels and Müller's return would be to forget that Germany spent the last 12 months looking a long way from being a contender.

Nevertheless, against a competent Denmark side less than two weeks before the tournament a 1-1 draw with a goal coming from a promising midfielder is not ideal. This is the time to win, and reward yourself when you are largely the better side — which Germany were in Innsbruck.

"Light and dark from us tonight," Löw said afterwards. "We defended well as a team for long passages compared to a few games before. But we lost our order in the second half a bit... It's definitely not a setback. The consequence of this is to see a game through over 90 minutes and that will be a topic across the next few days and weeks."

Ahead of that disastrous World Cup in Russia, Germany lost to Austria and then only just squeezed past Saudi Arabia. A lot has changed since then. But those results and the one tonight are a reminder that, whoever plays, momentum from these games matters.

To relive Germany's draw against Denmark, go to page two: