A device that was discovered Friday in the basement of Ria Novosti's office in Berlin's Steglitz district was "probably incendiary," according to police. An investigation into the "dangerous object" is still ongoing. 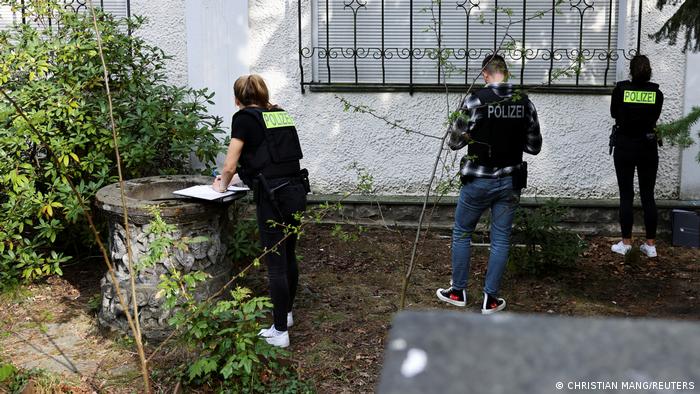 A device found in the building of a Russian news agency in Berlin was "probably" explosive, German police said Saturday.

Police had initially been called to the location on Friday afternoon after an empty beer bottle was thrown at the building's facade.

The device was discovered in the basement of a place "housing the office of a Russian press agency," Ria Novosti, in the city's Steglitz district, police said Saturday.

"Yesterday, emergency services found a dangerous object at the building of a Russian news agency in Steglitz, which was probably an incendiary device," Berlin police tweeted. "It was destroyed by specialists."

Whether it was a deliberate attack was initially unclear, a police spokesperson told German news agency DPA.

"There are also offices of other companies in the building," the spokesperson said. "The background is not yet known, the investigation is ongoing."

Germans are worried about an EU ban on Russian oil

The Russian state-owned news agency reacted on Telegram by saying that the placing of the device constituted "a possible terrorist attack against Russian journalists and their families" in Berlin.

The incident came as Russia prepares to hold traditional Victory Day festivities on Monday to mark the Soviet victory over Nazi Germany while tensions endure over its invasion of Ukraine.

Regarding the May 9 commemorations, domestic intelligence in Germany is expecting "car parades and demonstrations" in support of Russia, and possibly the invasion of Ukraine, to take place in Berlin and the state of North Rhine-Westphalia.

Berlin's former closeness to the regime in Moscow has damaged the reputation of German foreign policy. Can Chancellor Olaf Scholz's policy shift succeed, given this fraught history?