Intelligence services reportedly expect demonstrations in Germany and display of the "Z" symbol in support of Russia's invasion of Ukraine as Moscow commemorates the Soviet army's victory over Nazi Germany. 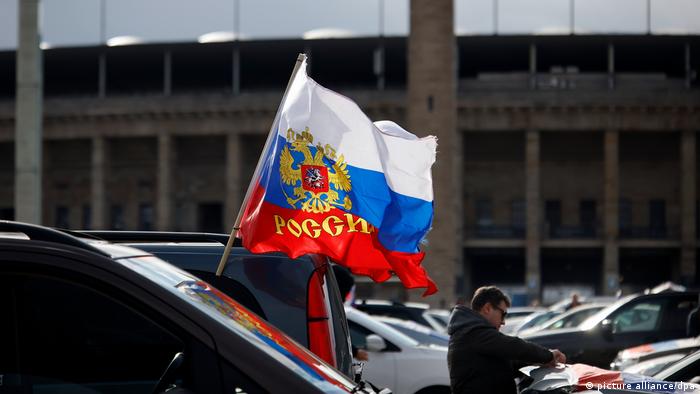 Domestic intelligence in Germany is expecting "car parades and demonstrations" on Monday in support of Russia, and possibly the invasion of Ukraine, German media reported on Saturday.

The Federal Office for the Protection of the Constitution reportedly expects the pro-Russia activities to occur on May 9 to mark Victory Day, a holiday that commemorates the Soviet army's victory over Nazi Germany in 1945.

This is "an ideal date to be exploited for Russian propaganda," the president of the intelligence agency, Thomas Haldenwang, told Sunday's edition of Die Welt newspaper, seen in advance by the dpa news agency.

"On this day, May 9, pro-Russian activities such as car parades and demonstrations are to be expected all over Germany, possibly also showing the 'Z' symbol of the Russian army invading Ukraine," Haldenwang said, according to dpa.

Police in several states across Germany have opened investigations into public displays of support for Russia's invasion of Ukraine.

More than 140 investigations have been launched, with most looking into the use of the "Z" symbol that has been seen in several protests in Germany alongside Russian flags.

The symbol has been associated with Russia's invasion after many of the vehicles that Russian forces drove into Ukraine had the letter painted on their side.

Several German states have classified the use of the symbol as a mark of unlawful support for the invasion.

Security services are preparing for pro-Russia activities particularly in the capital, Berlin, and North Rhine Westphalia (NRW), Germany's most-populous state, according to a survey of state Interior Ministries conducted by the newspapers of the Funke media group.

Lindner: 'No one' should support Putin's 'criminal rule'

He said he found it "shocking" that, during a Russian war in Europe, sympathizers of the Putin regime would abuse the anniversary of defeating the Nazis.

With material from the dpa news agency.

In one of the most awaited decisions in the world of sports, American billionaire investor Todd Boehly and his group have been named the new owners of Chelsea Football Club.

The Economy and Climate Minister says the legal action against the accelerated construction of an import terminal for liquefied natural gas will make it harder to move away from Russian energy.