Germany’s famous autobahns could be swarming with nippy electric cars by the year 2020 if Chancellor Angela Merkel's cabinet gets its way. 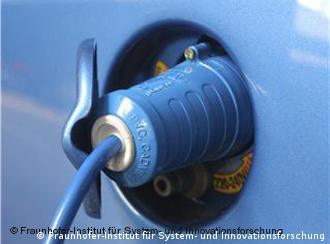 Germany plans to move to plug-and-go cars by 2012

Merkel and her ministers met on Wednesday to finalize a plan which calls for "financial incentives" starting in 2012 to support the sale of 100,000 electric cars. The plan envisages around one million electric cars on German roads by 2020.

At present, around 500 million euros ($704 million) have been earmarked for research and development. Progress would determine whether more funding would be made available. Specifics on the finances are to be discussed by the German cabinet in the next legislature period in the fall.

"The program is aimed at having a positive impact on investment decisions, give producers security and support the sale of electric cars," according to a copy of the plan released to news media.

Sigmar Gabriel, the German environment minister, told German television that the introduction of electric cars into the German market would have benefits beyond those of the environmental impact a reduction of fuel-driven cars would have.

Speaking on the ARD news program Tagesschau, Gabriel said that electric cars would help drive down the price of carbon-based fuels for those who choose not to swap to battery power.

However, he added that the technology for efficient and safe electric cars would not be in place until 2011 at the earliest. Batteries would have to become safer and smaller, he said, while safety issues still had to be clarified and the range the cars could travel on a single charge must be increased.

Opposition from the Greens

Even as the plan was announced, the opposition Green Party criticized it for being too narrow in focusing only on electric automobiles, insisting that all cars running on renewable energy should be eligible for funding.

Renate Kuenast, the leader of the Green Party parliamentary group, also criticized the government for not providing enough incentives for people to switch to electric cars or hybrid technology.

"The government creates a subsidy program for people handing in old cars but it has no incentive program in place to promote new electric vehicles," she said.

She also called for a balance in the purchase price between regular and electric cars, saying that prices of around 5,000 euros for an electric car would not convince people to swap. 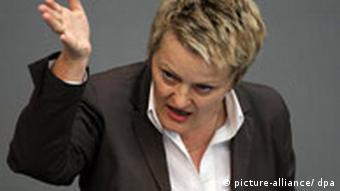 Kuenast wants the government to do more

The government's plan is also likely to come under fire from environmentalists who say that electric cars will expand the need for increased output from coal-powered and nuclear power stations.

One group which will be happy to see a deal agreed will be Germany's ailing auto industry. Any government approval is expected to signal a frenzied rush by the country's car manufacturers to get a jump on competitors.

Volkswagen has already announced that it hopes to introduce its first electric cars onto the market in 2013, while Daimler is working together with California-based electric-car maker Tesla Motors on developing better battery and electric drive systems for vehicles destined for the consumer market.

When it comes to electric mobility, the German capital is fast becoming the preferred testing ground for European companies to show off their newest technology. BMW and Daimler are both testing vehicles in Berlin. (22.07.2009)

In a bid to become the first car manufacturer to mass produce emissions-free cars, Volkswagen has announced it is teaming up with Japanese electronics group, Toshiba. (13.02.2009)

German carmaker Daimler is pulling out all the stops to fulfill the European Union's climate protection standards. The company says it will focus more on hybrid models, as well as smaller and more efficient engines. (17.01.2009)