Germany plans to increase support for reconciliation in Mali

The German cabinet has decided that Germany should step up its involvement in Mali. The peace process in the West African state is moving forward only slowly. 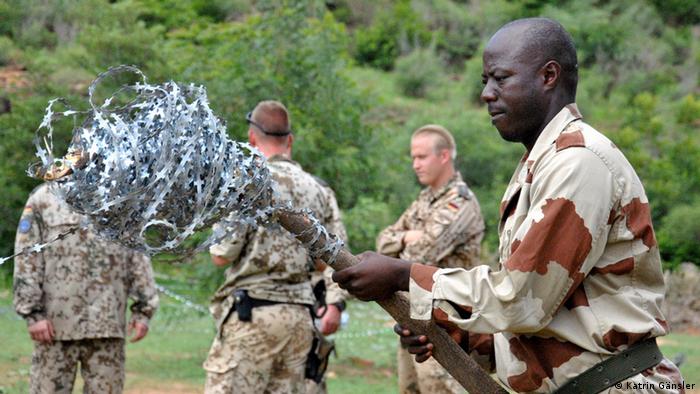 The German cabinet has given the green light for an expansion of the German armed forces' mission in Mali. The country's maximum permissible troop contingent is to be increased from 180 to 250 soldiers. Parliament still has to approve the decision. "It can be seen that the international community, the European Union and other states, are needed in Africa," German defense minister Ursula von der Leyen said before Wednesday's (05.02.2014) cabinet decision. Within an international alliance, it is important "that we also raise our voice and express our concrete views," she added.

At the moment the German armed forces, the Bundeswehr, have some 100 soldiers taking part in the European Union Training Mission (EUTM) in Mali. They are training soldiers of the Malian army who are fighting Islamist rebels in the north of the country. Another 70 German soldiers have been deployed to help with air transport in Mali and in neighboring Senegal.

Mali was plunged into chaos almost two years ago following a military coup which ousted President Amadou Toumani Toure. Turareg rebels and Islamist groups used the ensuing power vacuum to take temporary control of the north. French military intervention in January 2013 halted the advance of the Islamists towards the south. 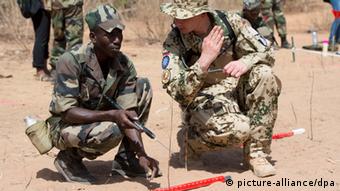 The UN mission MINUSMA has been stationed in Mali since July 2013. However, the security situation remains tense and hundreds of thousands of Malian refugees have not yet returned home.

The discussion about German support is being closely followed in Mali. "Germany has a very good reputation in Mali," Yakouba Berthe from the regional office of the Konrad Adenauer Foundation, a German political think tank, told DW. For one reason, because Germany was the first state to recognize Mali after independence. "But also because the French troops are losing support," Berthe said. "The population has the impression that France is protecting the armed groups." This is a reference to the French plan of cooperating with Tuareg militias in the fight against the Islamist jihadists. "If Germany were to become involved side by side with Mali, that would be greatly welcomed," Berthe said.

In an interview with DW, Mali's minister for reconciliation Cheick Oumar Diarrah said his country had begun a major program of reform, especially in the areas of health, justice and the security apparatus. "All support for the implementation of the reforms is welcome, from Germany or the European Union. We need expertise, material and financial aid," the minister said. 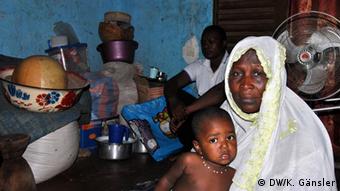 Many Malian refugees have not yet returned to their homes

However Diarrah was reportedly given only a muted welcome during his visit to Germany in late January. "One has to ask how serious are the statements made by Foreign Minister Steinmeier and Defense Minister von der Leyen {concerning involvement in Africa}, if they do not receive such a central figure in a regional conflict," said Julia Leininger, Africa coordinator with the German Institute for Development Policy (DIE).

Leininger and Berthe both stress that Germany should do more in Mali at the civilian level. "The political parties and civil society protagonists must be strengthened," Berthe said. Leininger points to German support for the planned decentralization as a positive example. This must be continued: "Especially as it is one of the Tuareg's central demands to transform Mali into a federal state, with more autonomy for the northern region. This is certainly a topic on which Germany can provide useful advice.”

Mali has had a democratically elected president in the person of Ibrahim Boubacar Keita since September 2013 and a democratically elected parliament since December of that year. The reconciliation process will however take a while,”"Berthe said. "Only when the parties really sit down together and negotiate, can one speak of reconciliation. So far, certain groups have not been disarmed - and if they flee they could again become a risk for peace and security." 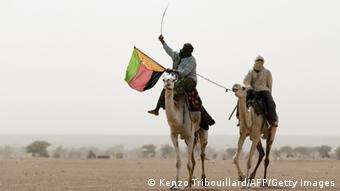 Tuareg rebels are fighting for autonomy in northern Mali

In addition, a new group has been formed which does not represent specific political demands but consists entirely of criminals, Leininger added. "It is not easy to negotiate with criminals. One would also not have dealings with the Italian mafia."

While the government struggles to achieve national reconciliation, the food situation in the north is becoming increasingly critical. Some 800,000 require food aid. In the coming weeks and months the figure could rise to three million, warn aid organizations in a joint appeal. Particularly hard hit are the regions around the cities of Gao, Timbuktu, Kidal and Mopti in northern Mali.

Germany to bolster its presence in Africa

Germany has declared that it will not contribute combat troops to the planned EU mission in the Central African Republic. In addition to providing logistical support, it is mulling over an exchange deal with France. (22.01.2014)

German Foreign Minister Annalena Baerbock visited Mali at the start of a tour of West Africa. The trip comes as the EU ends its Mali training mission due to the activities of Russian mercenaries.

Germany's top envoy Annalena Baerbock is visiting Bamako as Berlin prepares to decide whether to extend the Bundeswehr mission in Mali. France already said it would end its Barkhane and Takuba military operations.