Germany places second behind China in brand piracy | Germany| News and in-depth reporting from Berlin and beyond | DW | 11.08.2014

Germany has placed second in a ranking of the top countries of origin for counterfeit products. The damage to businesses in the engineering sector is estimated at 7.9 billion euros. 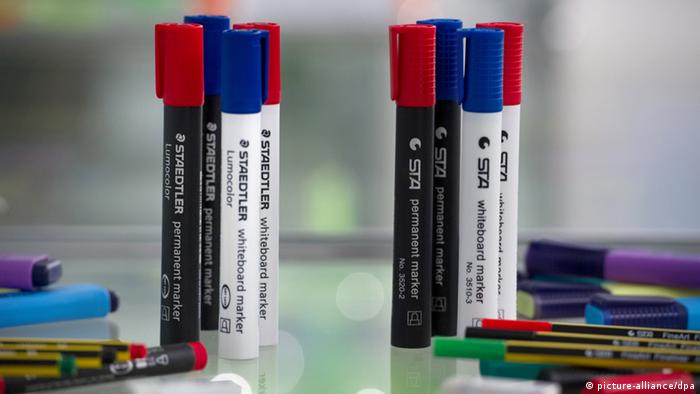 For many German firms affected by intellectual property violations, the perpetrator is often right around the corner.

China has long been the world's leading source of forgeries, but a study released this year has indicated that Germany too has its fair share of industrial copycats.

In 2014, nearly a quarter of counterfeited brands and products came from companies in Europe's top economy, placing the country behind China but ahead of Turkey and India, Germany's VDMA engineering association said in a 2014 study on product piracy.

Counterfeits made in Germany

But in contrast to the cheap knock-offs available in the world's most populous country, imitations by German firms were often of a superior quality. German counterfeiters often copied entire high-tech machines, components or spare parts, the association said.

The study cited fierce competition as the most common motive for violating another company's intellectual property.

Overall, VDMA estimated product piracy cost the engineering industry around 7.9 billion euros ($10.5 billion) last year in lost sales. But although it spoke of an "alarming amount" of product piracy in Germany, it noted that quantifying developments in other sectors was difficult.

"Many companies are afraid their reputation will suffer," said Steffen Zimmermann, the managing director of VDMA's working group on product and know-how protection.

The rampancy of industrial forgeries in Germany has inspired some people to come up with rather creative ways to combat the trend.

Since 1977, a group known as Aktion Plagiarius has bestowed faux awards upon companies that it perceived as the main perpetrators of product piracy.

Besides the usual suspects from China, award recipients have included a number of German companies.

One prominent example involved a manufacturer of a magnetic mop holder in the southern German state of Baden-Württemberg. Once the product hit the market, one of the company's competitors in neighboring Franconia began making a deceptively similar model.

The dispute over the mop holder earned the Franconian company third place in this year's Plagiarius awards and a place in the group's museum in the town of Solingen.

When it comes to product piracy, no sector is safe, Plagiarius' spokeswoman Christine Lacroix said.

Today imitators target everyone from toy manufacturers to toolmakers - something that has only made the forgery hunters' job that much harder.

While earlier imitation products could be easily identified by their poor quality, today the spectrum ranges from cheap knock-offs to high-quality replicas, she said.

And while Plagiarius' efforts to protect original innovation hinge on informing consumers, some companies have resorted to more technical tricks.

Components that are particularly susceptible to being copied are cast in resin, for instance, or marked with a hologram.