Irony Strikes as One of China′s Biggest Attractions Gets Pirated | News and current affairs from Germany and around the world | DW | 11.12.2007

Irony Strikes as One of China's Biggest Attractions Gets Pirated

They're one of the biggest draws on the global traveling artifact circuit. The Terracotta Army continues to march across the planet on a seemingly unstoppable mission to conquer museums. Even when they're not real. 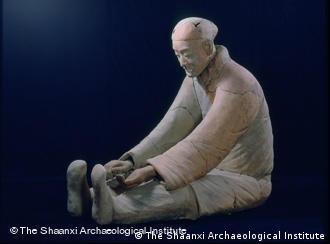 Emperor Qin would have been so proud.

Or would he? The emperor, who ruled from 259-210 BC and who created the army to guard him in the afterlife, is more than likely spinning in his very crowded grave at the moment. It seems that while many of his troops have gone on to achieve more than he hoped for in life and death, some unscrupulous types have infiltrated his army to make money off his legacy.

According to officials in Beijing and the city of Xian, the Terracotta Warriors on show at the Museum of Ethnology in the German port city of Hamburg are fakes. The Chinese officials revealed that noone had given permission for the 2,200-year-old clay soldiers to be sent to Germany for an exhibition.

The Beijing office that administers Chinese cultural treasures said it appeared the soldiers on display in Germany were illegal copies.

It's an ironic twist of fate, given China's propensity for looking the other way when pirate goods go on the market.

"There appears to be a problem with intellectual property rights," a spokesman said -- reportedly with a straight face. 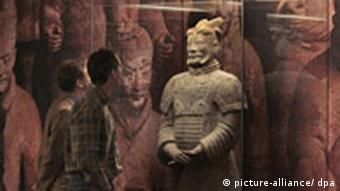 "Shiver me timbers -- I've been pirated"

An official at the provincial cultural affairs office in Xian, the city where the warriors were discovered in 1974, added, "We do not have an exhibition of terracotta soldiers in Germany."

He said the only exhibition in Europe at present was the one at the British Museum in London.

"If there were an exhibition in Germany, then we would have known about it because they would have required permission from us," he said.

Fake warriors up for grabs

Rumors that the eight figures exhibited in Hamburg might not be genuine first surfaced in Germany last week.

The Hamburg museum said it had demanded an explanation from the German-based Leipzig Center of Chinese Arts and Culture, which organized the display.

Copies of the genuine Terracotta warriors are readily available in China. One factory in Xian offers life-size imitations for 1,500 yuan (138 euros, $220).

The cultural office in Xian said overseas institutes that want to display terracotta soldiers have to present a plan in advance. The display in Hamburg definitely did not have official approval, the office said.

A German art student hoodwinked police in northern China's famed terracotta warrior museum by disguising himself as a clay soldier among a forest of ancient statues, state media said Sunday. (18.09.2006)

It used to be Nike shoes and Levi’s jeans. Now counterfeiters are copying more and more hi-tech products, such as microphones, stereo systems and MP3-players. German industry is looking for new ways to fight back. (15.04.2007)

Germans may have a reputation for being a little glum, but they're not all sourpusses. They can laugh or be laughable at times, and you can chuckle right along. Read up on the farcical side of Germany. (07.12.2007)

Have you been to see the Terracotta warriors in Hamburg? Have you had a refund? Please include your full name and country with any reply.