A Gambian man accused of belonging to a death squad appeared in court in Germany on Monday facing charges of crimes against humanity.

The suspect is also accused of murder and attempted murder as part of a group that assassinated opponents of dictator Yahya Jammeh.

The 46-year-old defendant is accused of being involved in two murders and an attempted murder while working as a driver for a notorious assassination squad known as the Junglers.

German federal prosecutors claim the unit was used by Jammeh "to carry out illegal killing orders, among other things." They say this was done with the aim of "intimidating the Gambian population and suppressing the opposition."

Among the crimes linked to Lowe is the 2004 killing of journalist Deyda Hydara.

The 58-year-old correspondent for the news agency AFP was gunned down in his car on the outskirts of the Gambian capital Banjul on December 16, 2004. 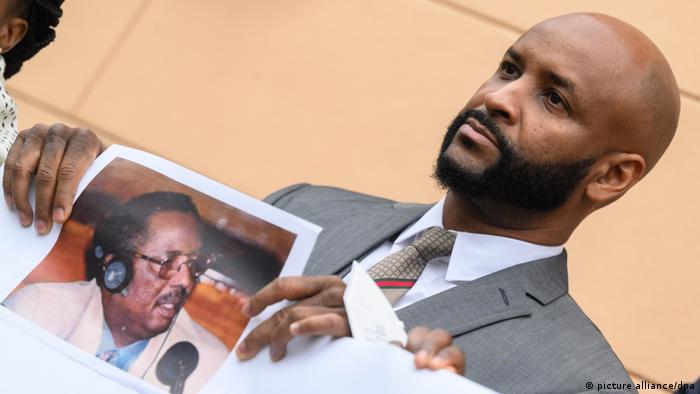 Baba Hydara, the son the the murdered journalist Deyda Hydara, outside the court on Monday

According to prosecutors, the defendant helped stop Hydara's car and drove at least one of the killers in his own vehicle.

The NGO Reporters Without Borders (RSF) is also pressing for two other alleged direct participants in Hydara's death to face justice. Another of the four alleged to have been involved has since died.

What is special about the trial?

The case is the first in the world to see human rights violations committed in Gambia during the Jammeh era prosecuted on the basis of "universal jurisdiction."

Under the principle of universal jurisdiction, a country can prosecute crimes against humanity, war crimes and genocide, regardless of where they took place.

The defendant was arrested in the German city of Hanover in March 2021 and is appearing in court in the nearby town of Celle.

While the case is the first of its kind to reach the trial stage, the 46-year-old is not the only person to be charged of crimes against humanity during Jammeh's rule in Gambia under universal jurisdiction.

Another alleged death squad member, Michael Correa, was charged in the United States in June 2020 with torturing people who were detained after a failed coup attempt against Jammeh in 2006. However, his trial has been delayed because of the coronavirus pandemic.

Who was Deyda Hydara?

Hydara co-founded and was an editor of the independent daily The Point. He was also a correspondent for the AFP news agency for more than 30 years.

He worked Gambia as a correspondent for RSF and had a widely read column, "Good morning, Mr. President," where he expressed his views on Gambian politics.

According to RSF, Hydara was under surveillance by Gambian intelligence services just before his death.

Hydara's son Baba Hydara said his father was was a tenacious and "really stubborn" journalist.

Baba told the AFP news agency that he hoped the trial was just the beginning and that Jammeh would also face justice in the future.

"There's a lot of expectation and this is just a first battle won but the war is still on," he said.

Jammeh took power in a bloodless coup in 1994, ruling the country as the head of a military junta before his election as president in 1996.

His 22-year-long rule was characterized by massive human rights violations, including repression of the LGBTQ+ community and opposition figures. Jammeh was eventually forced to leave the country in 2017 after losing a 2016 election to current President Adama Barrow.

Jammeh is now believed to be living in exile in Equatorial Guinea.

Why do African politicians cling to power?